This article is using {{Card template}}.
See Help:Style guide/Card for how to edit this kind of article.
Edit this article
Zombie Chow
1753 • FP1_001
Regular 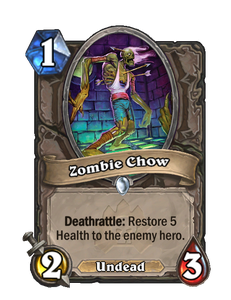 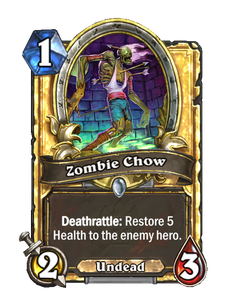 Zombie. It's what's for dinner. 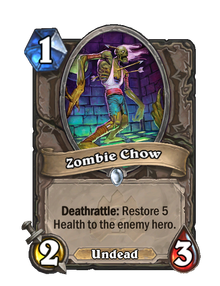 Zombie Chow is a common neutral minion card, from the Naxxramas set.

This card's Deathrattle is an obvious tradeoff for its otherwise low cost. However, in the right circumstances this can be offset, such as by silencing the minion, or by using it at the start of the game to trade for an enemy minion before the opponent has been damaged.

The most potent combination of all, however, is with Auchenai Soulpriest: with this card in play, Zombie Chow's Deathrattle will instead deal 5 damage to the enemy hero,[1] effectively turning it into a better version of Leper Gnome.

Gadgetzan Jouster offers the same stats for the same cost, but without the unfortunate Deathrattle, provided you win the Joust, as does Twilight Whelp, provided you are holding a Dragon.

Zombie Chows can be found in Naxxramas. They spawn during the encounter with Gluth. They must be kited until Gluth reduces their health with Decimate, and then quickly killed.