This article is using {{Card template}}.
See Help:Style guide/Card for how to edit this kind of article.
Edit this article
Zola the Gorgon
46403 • LOOT_516
Regular 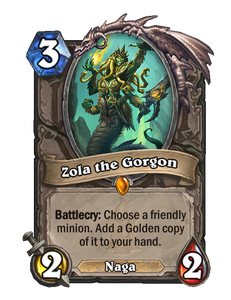 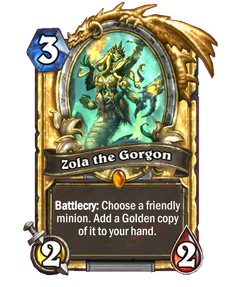 Her name seems a bit cheesy. 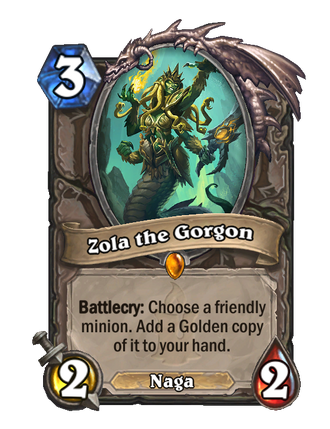 Zola the Gorgon is a legendary neutral minion card, from the Kobolds & Catacombs set. 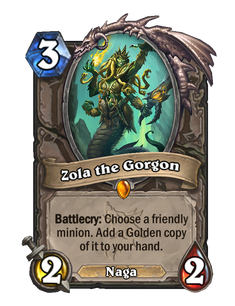 Zola the Gorgon adds a copy of a minion you currently control to your hand; the copy being Golden is primarily for flair, but the copying effect is still highly valuable. Unlike cards that return to hand like

Youthful Brewmaster, her effect does not kill tempo. Zola's effect is best used on minions with powerful Battlecries, or in decks where having multiple copies of a minion is extremely useful (such as Jade Golem decks or decks based around

Amara, Warden of Hope are very powerful minions to copy.

Zola the Gorgon is unique to Hearthstone. She appears to be a naga sea witch.

These scaly denizens of the ocean have often been associated with the coming of prodigious storms, but few have actually seen them rise from the sea and lived to tell the tale.