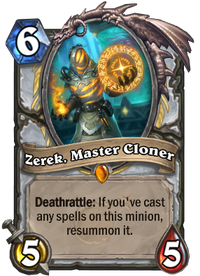 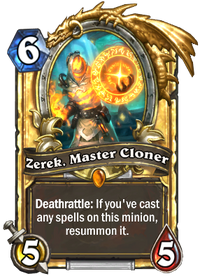 Deathrattle: If you've cast any spells on this minion, resummon it.
Flavor text

His original name was Aerek. Then the first clone was Berek. They went evil around Merek.

For the boss of the same name, see Zerek, Master Cloner (boss).

Zerek, Master Cloner can be obtained through The Boomsday Project card packs, or through crafting.

Zerek is a low tempo minion, but can potentially be a very sticky minion. With bare minimum support, he's a Cairne Bloodhoof with +1 Attack, but can have much more staying power as long as you have some cards to use on him. He works best with cheap spells like Power Word: Shield and Extra Arms. The card which combos best off of is Embalming Ritual, creating two Zereks when destroyed while making at least one copy more likely to stay on board to continue abusing his effect. Power Word: Replicate is an obvious synergistic card, although it's prohibitively expensive.

Once his effect is active, he's a strong target for cards like Shadowy Figure and Wretched Reclaimer to create more copies of.

Zerek is an ethereal, a race from the planet K'aresh who were transformed into energy beings when the void lord Dimensius came to their world. Zerek himself is unique to Hearthstone.

I am pleased to provide a status update on the progress of my experiments. An organized system is a more perfect system.

My people, the ethereals, lost our corporeal forms long ago, becoming energy-based beings in the process. While that offers many advantages over our sloppy, meat-based counterparts, it presents challenges in others. I’ve spent much of my life searching for a way to ensure the survival of our most important personage: myself. The answer? Cloning!

My work has progressed swiftly. The chamber in which we stand houses my Cloning Gallery: row upon row of cloning chambers, each capable of growing duplicates of an encyclopedic array of beings on demand. With the power of this facility, I can produce an army of those clones at will, and my proprietary process allows them to grow to full maturity at a vastly accelerated rate.

I’m aware of that! I said “maturity,” not “size.” When produced en masse, they are much smaller than usual and regrettably moist. And leper gnomes are always small and moist.

If perfection was easy, everyone would do it!

This is an enormous undertaking, mech—I can’t be everywhere at once! Yet. That’s why we’re here, after all. Cloning biologicals is simple. As an energy-based life form, cloning a perfect version of myself has proven . . . challenging. My current assistant is less methodical than I’d like.

Please relay to Dr. Boom that I require an assistant with the wit and precision for the work at hand. And if they manage to meet my expectations? Well, I’ll make more.

When Hex or Polymorph is played on a Zerek, Master Cloner that has a spell cast on it, the unique graphical enchantment effect which surrounds Zerek will continue to be on the Frog or Sheep.