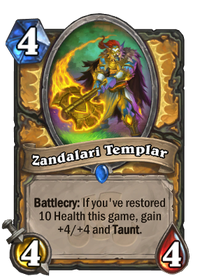 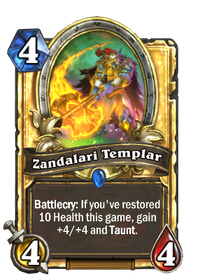 YOU WERE A TEMPLAR, JONDAR!

Zandalari Templar is a rare paladin minion card, from the Rastakhan's Rumble set.

Zandalari Templar can be obtained through Rastakhan's Rumble card packs, or through crafting.

Zandalari Templar requires a healing build to be useful. It will almost never be active on turn 4, making it a lategame play.

You can't always rely on your opponent to damage you. However, you can use cards like Crystallizer, Ornery Tortoise, and High Priest Thekal to lower your health by yourself. You can also attack with weapons.

Sanctuary may attrack your opponent focus to your Hero, opening the possibility for an early summon.

Equipping Bloodclaw deal 5 auto damage, if you consider the damage you may take while attacking, this can probably give the right opening, and then 2 Holy Light or 2 Flash of Light will be enough for Zandalari at 5 mana.

Lay on Hands will instantly boost Zandalari, since probably you have already healed at least 2 damage.

Since its Battlecry is a +4/+4 boost, Brann Bronzebeard can create a low cost 12/12 taunt monster.

When a Zandalari is copied, the heal count will initiate from 0, except when he is copied AFTER his Battlecry.