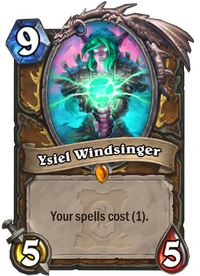 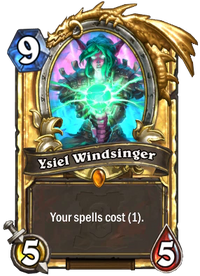 Reach down into your lungs. The wind that resides there is your greatest treasure. It provides the gift of song, which is free.
*But not less than (1)

Ysiel Windsinger is a legendary druid minion card, from the Ashes of Outland set.

Ysiel Windsinger can be obtained through Ashes of Outland card packs, through crafting, or as an Arena reward.

Ysiel has the ability to wildly impact games, and is quite similar to Aviana. Her effect works well with Treant and Quest Druids, who can play large spells like Hidden Oasis, Force of Nature, and Soul of the Forest for virtually nothing. However, Ysiel's 5/5 statline makes her susceptible to being killed by larger minions or large spells, so it's good to bait out your opponent's removal before playing her.

The only ways to exploit Ysiel's ability is to play Nourish, Biology Project or a cost-reduced Kun the Forgotten King in Wild (Jeppetto and Aviana work well with both Ysiel and Kun), as Innervate would cost 1 Mana, giving no net gain. Floop's Glorious Gloop could also be used (combined with Innervate before playing Ysiel) and combined with BEEEES!!! afterwards. Then cards such as Overflow, Gift of the Wild, The Forest's Aid or Ultimate Infestation in Wild can be played cheaply. Compared to Kael'thas Sunstrider, Ysiel is more flexible at cycling through cards after you have Aviana and Kun, since you don't need to time your spells in order to play your big draw spells, but much less effective without them.

Ysiel Windsinger is a level 68 quest giver located at Cenarion Refuge in the contested territory of Zangarmarsh. She is located on the back porch of the inn.

Ysiel is the leader of the Cenarion Expedition. She also appears in the Dreamgrove during the Burning Legion's third invasion.