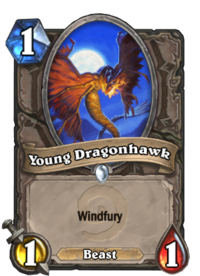 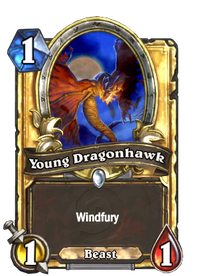 They were the inspiration for the championship Taurenball team: The Dragonhawks.

Young Dragonhawk is a common neutral minion card, inducted into the Legacy set, formerly from the Classic set. 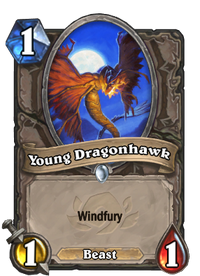 Young Dragonhawk can be obtained through Classic card packs, or through crafting.

Young Dragonhawk has Windfury, allowing it to attack twice in a single turn. This makes it a very good target for spells like Blessing of Kings which buffs its attack, and a good minion for directly attacking the enemy hero (as it will take no damage).

Cards that buff your hand like Grimestreet Outfitter can increase its value significantly since it costs only 1 mana. A +1/+1 buff allows it to deal a potential to 2 extra damage thanks to its Windfury .

Dragonhawks are flying creatures native to Quel'Thalas and tamed by the blood elves and the trolls of Zul'Aman. Dragonhawks are deft predators that rend their foes with razor-sharp talons

Grotesque Dragonhawk is the corrupted version of this minion.