This article is using {{Card template}}.
See Help:Style guide/Card for how to edit this kind of article.
Edit this article
Yogg-Saron, Master of Fate
60445 • DMF_004
Regular 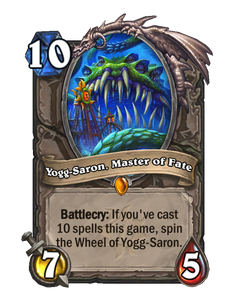 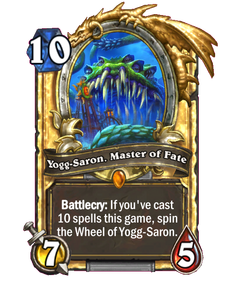 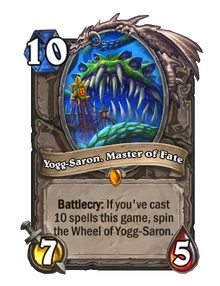 Yogg-Saron, Master of Fate is a legendary neutral minion card, from the Madness at the Darkmoon Faire set. 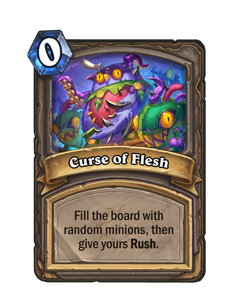 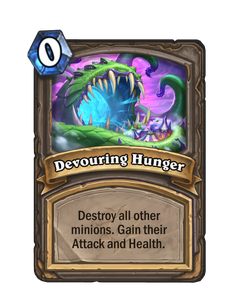 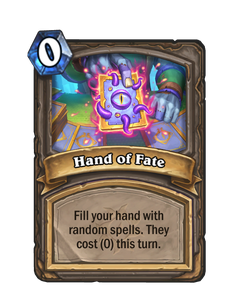 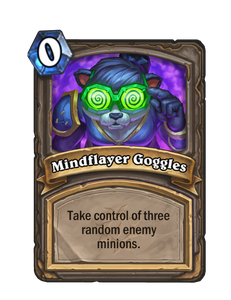 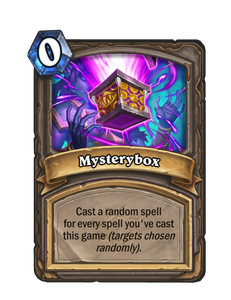 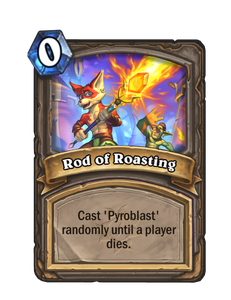 Like the original Yogg-Saron, Hope's End, Yogg-Saron, Master of Fate is an extremely random, high-risk high-reward card. Most of Yogg's results from the wheel are usually helpful when you are behind, making this card good in Control decks stalling out for a win condition. Make sure you have taken all the precautions from this card BEFORE you play him, as Rod of Roasting or Mysterybox can end the game outright. Do keep in mind that Yogg's effect is conditional, making him more suited for decks that can play lots of spells.

The most ideal conditions to play Yogg-Saron are when you have an empty board and the opponent has three or more minions, ensuring maximum value from Mindflayer Goggles, summoning minimal minions for your opponent with Curse of Flesh, and avoiding destroying your own board with Devouring Hunger. The sole exception is Rod of Roasting, which will typically result in a win for whoever had the highest health. While not always possible to play around, you should try to play Yogg while both players have similar health or yours is higher.

This is ideally used when the opponent has a full board and you have an empty one, giving them no minions and giving you six that are available to attack. Since you have the initiative, this lets you make ideal trades. Try to kill off Deathrattles it generates and let end-of-turn effect minions survive.

This is the most straightforward fate, nuking the board and putting a huge minion in play. Yogg is likely to get hard removed after casting this, but can provide a huge threat in case the opponent has nothing. This one is especially devastating against all-in aggressive decks, but weaker against a control match-up.

This is the most controlled fate, giving you a random assortment of spells that you can aim wherever you like. The typical hand will gain around five cards, which is decent but less likely to save you from a sticky situation than the others. Any spells that aren't played can be kept for later value, making this a good result for slower games.

Stealing three minions while summoning an additional 7/5 can be utterly devastating for the opponent. The main downside this has is that wide boards aren't likely to have very many powerful minions, but even in the worst case this is still a potential +7 in board advantage.

This fate lets you play with the original Yogg-Saron. This effect is incredibly powerful, but also massively unpredictable. For more specific notes on this one, see Yogg-Saron, Hope's End#Strategy.

With a much smaller chance to show up, Rod of Roasting provides an unstoppable, explosive ending to the match. There's not much you can do to play around this one, other than try to ensure that you have a higher health total than your opponent. Cards that grant Immune to your hero, such as spells like Time Out! and Blur, can be used to guarantee that Rod of Roasting will kill the opponent. Since Rod of Roasting only has a 5% chance to be cast, this is only a gimmick rather than a reliable strategy.