Year of the Mammoth

These card sets are released as a part of Year of the Mammoth. 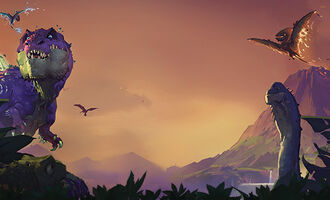 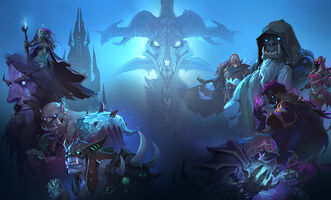 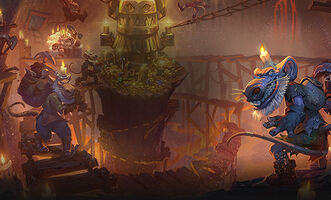 These patches were released during Year of the Mammoth.

The second Standard year started with the release of the first expansion of 2017. The beginning of 2017 saw the Blackrock Mountain, The Grand Tournament and The League of Explorers sets moved to Wild format. Additionally, for the first time, six cards from the Classic set rotated to a new Wild-only card set called the Hall of Fame. This move takes the place of the nerfs seen at the start of the previous standard year, with no other card changes planned.[2]

The run-up to the start of the new year also featured some special events, such as the release of the

Maiev Shadowsong hero, several special Tavern Brawls (including a Wild-format reprise of the Heroic Tavern Brawl and some "party" variants on previous Brawls), and daily login bonuses, awarding players for logging in with dust, gold and card packs.

The video below gives a visual depiction of the set rotations. An extensive live Q&A session was also held giving answers on a range of related topics.

With the start of Year of the Mammoth,

Sylvanas Windrunner were removed from the Classic set and added to the new Hall of Fame set, thus moving them from Standard to Wild format.

Old Murk-Eye were also moved to the Hall of Fame set from the Reward set. Although not previously officially announced,

Elite Tauren Chieftain were also moved to the Hall of Fame set from the Promo set.

All players received bonus arcane dust in compensation for the full crafting cost of copies of the above Classic cards they possessed. Note that the cards themselves were not disenchanted, only moved to Wild format.

Once moved to the Hall of Fame set, these cards were removed from their previous sets, and no longer feature in Classic card packs,[3] be offered as rewards in the Arena, nor featured in the Highest Rank Bonus chest. Instead, as Wild format cards, they are now only obtainable through crafting.[4]

A minor consequence of the change is that the Mage, Rogue, and Warlock classes now had only 5 common Classic cards each instead of 6,[5] making these classes slightly less likely to gain class cards from Classic packs.

The new set is intended to help keep the Standard format meta fresh and ever-changing. For more on the motivations behind the move, as well as comments on each card involved, see the official blog.

At the start of the year players received arcane dust equal to the full crafting cost of any copies of the formerly Classic cards they possessed.

Elite Tauren Chieftain were not eligible for this bonus since the Reward and Promo sets were already exclusive to Wild format.[6]

As a result of the above rules, players could have capitalized on the move to (1) gain free cards, (2) gain free dust, or (3) upgrade to golden cards for reduced cost:

(1) Players who did not own the maximum usable number of copies of any of the cards listed could have effectively crafted them for free.

(2) Players who did not already own two golden copies of the common cards listed could have gained a small amount of free dust by crafting golden copies, then disenchanting them following the refund.

(3) Players who already owned regular versions but not golden versions of the cards could have also used the refund to get a discount on the crafting cost of their golden versions.

Aside from the above three options, the dust values involved prevented players from exploiting the move.

For more details and calculations, see Maths on Year of the Mammoth Dust Investments.

Each day from March 29 to April 5, players were rewarded for logging on with special bonuses.