This article is using {{Card template}}.
See Help:Style guide/Card for how to edit this kind of article.
Edit this article
Y'Shaarj, Rage Unbound
38312 • OG_042
Regular 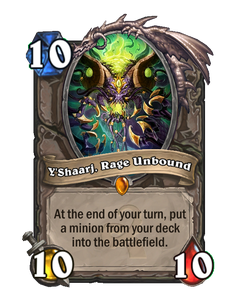 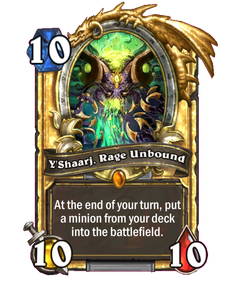 Dimensions: Full • 330 x 410px
Elite
At the end of your turn, put a minion from your deck into the battlefield.
Flavor text

When he's working out, he binds all that rage back into a ponytail. 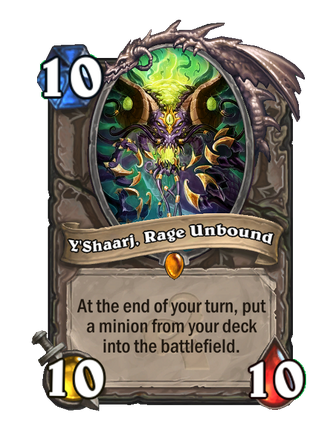 Y'Shaarj, Rage Unbound is a legendary neutral minion card, from the Whispers of the Old Gods set.

This card's end of turn effect provides obvious synergy with big minion decks, featuring powerful, high cost cards. Y'Shaarj can provide a strong tempo advantage, allowing the player to get an additional minion onto the battlefield each turn.

A great card to use in a deck with

Deathwing onto the battlefield.

With its potentially game-winning ability, don't expect Y'Shaarj to stay on the battlefield for long. To get the most out of it, protect it with Taunts, and/or bait the opponent into using their removal before you play Y'Shaarj.

One of the best synergies available with Y'Shaarj is

Barnes. If you're lucky to summon a 1/1 Y'Shaarj, it may bring another high-mana, full-stat minion into the board as early as turn 5, such as the actual Y'Shaarj.

Y'Shaarj is the Old God of Seven Heads and most powerful of the Old Gods, dominating Azeroth until the coming of the titans.

Deceased in the main Warcraft timeline, Hearthstone marks Y'Shaarj's first proper appearance in any medium. Y'Shaarj has previously been very sparingly described, primarily in mantid mythology, and illustrated in a single mural seen in World of Warcraft, but this is the first time it has been properly depicted, making its appearance in a sense original to Hearthstone. The title "Rage Unbound" is also original.

Notably, this appearance differs significantly from earlier descriptions which referred to seven heads, calling Y'Shaarj "the beast of seven heads" and "the seven headed one". It is possible this was a metaphor for the Old God's prodigious capacity for evil, or it may be an exaggeration that crept into the mantid's mythology over the millenia. Regardless, the Y'Shaarj depicted here seems to have only the one head.

Y'Shaarj (pronounced Yah-Sha-Raj or /'jaʃaˌɹadʒ/) was the Old God of Seven Heads most powerful and wicked of the Old Gods, eldritch horrors who threatened the world of Azeroth millennia ago. Y'Shaarj was said to be the only Old God to have been killed by the Titans especially Aman'Thul. Its heart was imprisoned in a vault beneath the Vale of Eternal Blossoms and later found and restored by

Garrosh Hellscream, who then transported it to Orgrimmar's Underhold. The heart was used by Garrosh to increase his power during the final battle of the Siege of Orgrimmar. As Garrosh was defeated, the heart and its power dissipated, leaving nothing left of Y'Shaarj's corrupting influence.

Y'Shaarj is the 'progenitor' of the seven sha primes.

As the Old Gods, horrors who had plummeted down from the Great Dark and embedded themselves in Azeroth's very surface, spread their corruptive influence across the land, the matter that seeped from their massive forms gave rise to two distinct races: the n'raqi and the aqir. The n'raqi acted as ruthless taskmasters, employing the aqir as laborers to build massive citadels and temples around their masters' colossal bulks. The greatest of these bastions was built around Y'Shaarj, the most wicked and powerful of the Old Gods. The domains of the Old Ones would soon spread over Azeroth, becoming known as the Black Empire.

Located in what is now Pandaria, the mantid race, descendants of the aqir, worshipped Y'Shaarj's seven heads. The Titans slew the Old One, but with its dying breath it cursed Pandaria by infesting it with "shadows of its former self," the sha. Y'Shaarj was said to have "consumed hope and begat despair ... inhaled courage and breathed fear".

At the command of Garrosh Hellscream, goblin engineers began excavations in the Vale of Eternal Blossoms to find a mysterious artifact, but found more than they bargained for. With the mining crew terrorized by an ancient power in the depths, adventurers were called in to retrieve whatever remained of the excavation. After clearing the mine full of the Blood of Y'Shaarj, adventurers blasted their way into an underground room. Inside the Vault of Y'Shaarj was found a chest, suspended from chains, which contained the Heart of Y'shaarj.

Garrosh Hellscream later fully restored the Heart of Y'shaarj using the pools of Pandaria. Fortunately, the whole God was not resurrected. The heart was taken to Orgrimmar, and placed in the Underhold, Garrosh's new seat of power.

After Garrosh's defeat, the Heart has suffered a failure and the Fading Breath briefly remained on the floor of the Underhold, then faded from existence, ending the life, influence and corruption of Y'Shaarj. With every Sha Prime and its heart dead, nothing remains of its power.

The biggest Old God on the block, Y’Shaarj was once the head of the largest empire to ever grip the face of Azeroth. This magnificently malignant entity had a real head for the political game, and raised armies of hideously devoted servants to do its bidding. Even the other Old Gods were impressed! Y'Shaarj - 10 mana - 10 attack - 10 health - At the end of your turn, put a minion from your deck into the battlefield.

But even with such great power—not to mention a swanky temple city—Y’Shaarj still had some anger issues. Who wouldn’t be miffed after having pieces of yourself strewn about everywhere, while scruffy little mortals panda-handled your heart? These truly heart-wrenching events in Y’Shaarj’s past are why the moody Old God tends to be the death of the party. Its (last) terrible breath* doesn’t just clear rooms—it clears whole continents! Despite appalling personal hygiene, Y’Shaarj has a way of clutching hearts and changing minds; even the most willful of beings cannot resist following it onto the battlefield.[2]