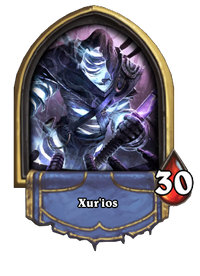 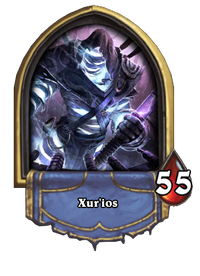 Master of spellcasting. Lousy at spell-aiming.

Xur'ios is a boss that can be encountered in The Dalaran Heist adventure.

Xur'ios plays a standard mage spell deck. The only thing you have to worry about is the card he draws at the start and you have the advantage of him deciding not to play it. Simply play as normal by building up your board and deal with whatever he throws at you.

If he plays such cards as Bloodmage Thalnos, Loot Hoarder or Gadgetzan Auctioneer, kill them on your turn to prevent effect of his hero power. Otherwise with good draw he can easily cast a lot of 0-cost powerful spells like Cabalist's Tome, Firelands Portal or Power of Creation in one turn what would be fatal for you likely.

Arch-Villain Rafaam
Xur'ios! The craftiest of ethereals. Your magic will be unstable around him.

Xur'ios
Ooh, a Warlock. I know your kind well.
Tekahn
I have allied with one of your more... powerful kin. Perhaps you've heard of Rafaam?

Xur'ios casts 0-cost spell
Chaos does have a purpose.
That one got away from me.
That works for me.
Player draws a spell
I trust that is what you wanted?
It's for your happiness.
Was that what you intended? Hm.

Xur'ios
Have you come to speak with the Nine?
I see between the galaxies.
I suppose we shall unravel some of the mysteries of time while we wait.
I was not sent here to wait around.
There is much your future holds that remains unseen.

Ah, a coin. How curious.

Before the Darkness, there was the Light.

Nice legendary. I'll trade you for some of my more exotic wares.
Quite an exotic weapon you've got your hands on.

Hm, another Agent of the Nine perhaps? Interesting...

Xur'ios
This is but one end...

Xur'ios
I was told this would be more difficult.

Xur'ios is an ethereal vendor that can be found at the Antonidas Memorial in the Broken Isles version of Dalaran.