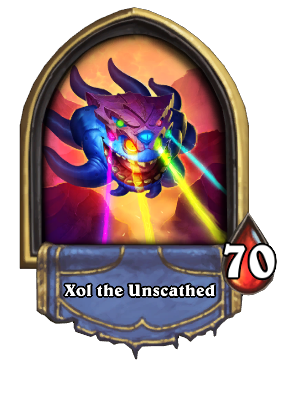 She's got her eyes on you. ALL of her eyes.
External links

Xol the Unscathed is a boss that can be encountered during the Dungeon Run.

King Togwaggle
Do not be looking into Xol's eyes! She is having eyes all over her big face.

Xol the Unscathed
So clever to come so far... let me see you...

Xol the Unscathed
I only have eyes... for you.

Xol the Unscathed
Foolish little trespasser. I see all.

Xol is unique to hearthstone. She is an Observer found underground.

Xol's hero power gives her access to multiple Beam cards she can use to affect the board, all of which she telegraphs by mentioning the beam she received. Here is a conversion chart:

The rest of her deck is a Discard Warlock deck built around Lakkari Sacrifice, and her Hero Power can generate free Beams to be discarded with little drawback. That said, it is possible to make the fight incredibly easy if she controls a Howlfiend. If you are lucky enough and get enough instances of damage on the Howlfiend, you can force her to complete her quest and then discard the Nether Portal she will receive. If you have the Gloves of Mugging, you can even steal the Nether Portal off her. If she has finished the quest by the time she has 10 mana and has the portal in her hand, try flooding the board with as many minions as possible. If Xol has Deathwing in her hand, her AI will tell her to activate Deathwing to clear the board, discarding the Nether Portal in the process.

Otherwise, be prepared to stave off an endless stream of 3/2 Imps coming out of the portal. Some Death Knight Hero Powers can mitigate the power of Nether Portal (notably Shadowreaper Anduin, Scourgelord Garrosh and Bloodreaver Gul'dan).