Hearthstone Wiki
Register
Don't have an account?
Sign In
Advertisement
in: All cards, Wild format cards, Pages with no result queries, Satyrs

This article is using {{Card template}}.
See Help:Style guide/Card for how to edit this kind of article.
Edit this article
Xavius
556 • EX1_614
Regular 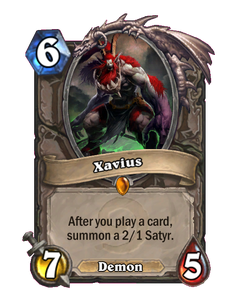 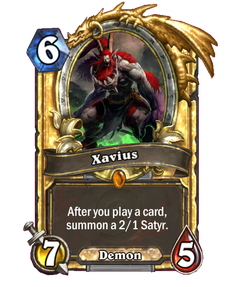 Xavius has grand nightmares of summoning Sargeras into this world, but a few Satyr will have to do for now. 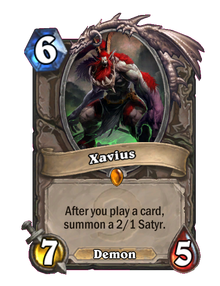 For the boss in Demon Hunter Prologue, see Xavius.

Xavius is a legendary neutral minion card, inducted into the Legacy set, formerly from the Classic set. 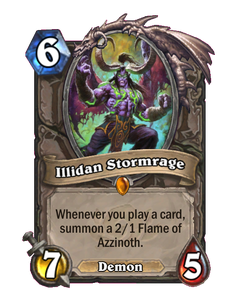 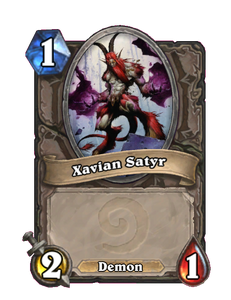 Xavius is a 6 mana, 7/5 minion which summons a 2/1 Xavian Satyr whenever you play a card. This can be used with a combination of cheap cards to fill your board with minions. In opposition, Xavius is a priority target, and should be silenced or destroyed as soon as possible to prevent him from becoming a lingering threat. However, these minions will be unable to act until the next turn, leaving them vulnerable to attack from the opponent. Combined with their 1 Health and Xavius' low Health, it makes him and his minions easily defeated by AoE attacks.

Ideally, you should play multiple cards immediately after playing Xavius to make use of his ability before the opponent has a chance to remove him. This becomes easier if Xavius can be summoned into the battlefield for free, such as through Skull of the Man'ari or Possessed Lackey. If possible, use AoE buffs such as Power of the Wild to bolster the survivability of the Satyr minions, reducing the likelihood of the opponent removing them before they have time to act.

Xavius, the Nightmare Lord, is the first of the satyrs.

Lord Xavius was one of the Highborne's most powerful sorcerers and the high councilor to Queen Azshara during the time of the War of the Ancients. Since Azshara concealed her magical prowess, Xavius was considered the most powerful Highborne to whom the rest measured their skills. He was later transformed into the first satyr by Sargeras, before ultimately being transformed into the dreaded Nightmare Lord.

He makes his first appearance in World of Warcraft as an antagonist in World of Warcraft: Legion, where he once again helps the Burning Legion—while remaining first and foremost a loyal servant of the Old Gods. Xavius serves as the main antagonist of the Val'sharah storyline, corrupting the Shaladrassil and battling his old nemesis, Malfurion, and his allies. He also serves as the final boss of the Emerald Nightmare raid, where the Nightmare Lord ultimately meets his end for the time being.

Xavius was added to the Classic set in Patch 17.0.0.44222, replacing the original Illidan Stormrage card, with Illidan becoming the base hero of the Demon Hunter class. Notably, the card received some minor mechanical changes as well: it now summons 2/1 Demons instead of 2/1 Elementals, and it summons them after a card is played instead of whenever a card is played, removing a number buggy interactions that can occur with it.