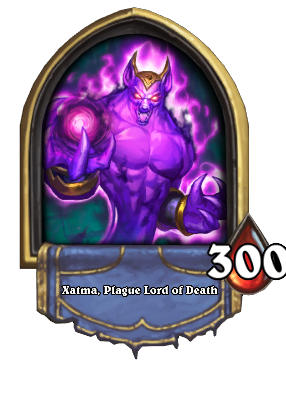 The third plague rests in final breath: You face the ancient Lord of Death!

Xatma, Plague Lord of Death is the final boss in Chapter 3 of Tombs of Terror. 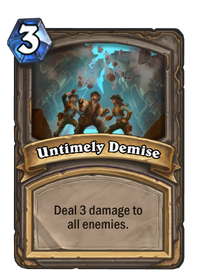 Xatma is the strongest of the first four Plague Lords. This is due not only to his decks, but also to the hero powers, which exert the most pressure on all three phases compared to the other three Plague Lords. Xatma tries to activate as many Deathrattles as possible and then begins to resurrect them. A huge quantity of Taunts, removals (including Deathrattle minions) and Lifesteal make face-rush tactics useless regardless of the phase - this will not only give the boss an easy opportunity to take the board, but also to restore the damage received. Therefore, during walkthrough of Chapter 3, focus on building a swarm deck and looking for cards that generate resources rather than having big stats. This will allow to deal much more damage to the boss than with aggressive play. This is also due to the fact that most of the player's minions will be dying quickly from enemies' Deathrattles or Plague of Death.

Despite the twist of Chapter 3 is synergistic with Deathrattles, Eternal Tomb will not cause much trouble in this battle. At first, in most cases random generated minions will be much weaker than most of the minions in Xatma's decks. At second, they significantly spoil the graveyard for the future Hadronox, N'Zoth, the Corruptor, Catrina Muerte, Twilight's Call, and Nine Lives. The most desirable random Deathrattle is Lucentbark. If this minion appears, kill it as many times as possible to fill Xatma's table with dormant minions that will be almost impossible to awaken, as well as to reduce the effect of resurrecting cards (this can be most easily done during the second phase). The more sleeping Lucentbarks there are on the Xatma's board, the more boss will be limited in playing minions, which will allow to easily control the board. Currently the only exception with Eternal Tomb tactics is Rattlegore - if it appears on the board, remove it from play without killing it as quickly as possible. Otherwise it will cause the need for much more same tools after Xatma will strat to resurrect an army of sticky 9/9s minions.

Note that Xatma will not be holding Plague of Death in hand even if he has 2 or more minions in play against the player's strong full board. Also while playing in Normal mode during Phase 3 the player can safely forget about boss' N'Zoth, the Corruptor and Hakkar, the Soulflayer because of auto-cast of third hero power that cost (1).

The most useful passives and treasures in this encounter:

His first hero power is the strongest as it allows him to trigger any his Deathrattles multiple times for 0 mana. The most unpleasant minions during this phase are Sylvanas Windrunner and Stalagg with Feugen. The best way to play around Sylvana is to save the most valuable minions for later play and make sure that by turn 4-6 the player has a removal in hand to get rid of Sylvana immediately. In general, it does not matter what kind of Deathrattle minion Xatma is playing, kill it as quickly as possible, otherwise it will easily snowball with constant and free getting value from Deathrattles no matter how strong they are. Also, this hero power is very good target for copying with Stolen Titan Secrets treasure.

In the second phase the player has to slightly change the tactics. During this phase the boss tries to trade rather than kill the player's minions without losing his owns. Destroy the weakest minions first to make it easier to kill the rest. Since the hero power is an aura (like effect of Frost Lich Jaina or Crystal Core), giving Silence on a minion before the first death will not affect the activation of Reborn. Thus the player needs to play carefully to do not constantly lose the minions from semi-infinite Deathrattles or Plague of Death, and thus make sure that not only the boss benefits from his hero power. For example, try to firstly kill a minion with Battlecry, such as N'Zoth or Da Undatakah, or weak Deathrattle minions (Bloodmage Thalnos, Dead Ringer, Dark Cultist). Such minion as Octosari is preferable to kill no more than once per turn at all for huge milling of Xatma.

Also, as mentioned above, the other most desirable enemy minion in the second phase is Lucentbark, which can appear from the Eternal Tomb. The only difficulty in his repeated destroing is rare free space on Xatma's board for summoning the second Lucentbark, so filling the boss' table with dormant minions would not be quick.

The third phase is the easiest in this battle. The hero power can help to control the board again, giving a choice of either not giving the boss AoE at all or bringing Xatma's minions closer to removing. Since Xatma always gets only one copy of Untimely Demise regardless of the number of minions killed, it does not make sense to constantly spending the resources (playing a lot of cards from hand or to keep the minions on the board as long as possible) to prevent a not too dangerous AoE. Excessive board control can hurt here more than help.

Reno Jackson
A plague of... DEATH!? Aren't you kinda skipping a few steps?
Sir Finley
You seem the unpleasant type. Death, I presume?
Elise Starseeker
The League of Explorers has faced death before - I do not fear you!
Brann Bronzebeard
So yer the Plague Lord of Death? Not. Impressed.

Xatma, Plague Lord of Death
Death's embrace awaits...
Nothing can stop death...
Treasures will not save you. (vs. Reno Jackson)
The Light cannot drown out death. (vs. Sir Finley)
All of your knowledge… wasted. (vs. Elise Starseeker)
The titans cannot hear you, dwarf. (vs. Brann Bronzebeard)

The shadow of your demise looms.
Its pursuit will never cease.

You will find no salvation.
You cannot escape.

The end awaits.
Your time is running out.
Death itself cannot be stopped. You shall see.

Death and rebirth are one.
Let it pour over you.
Life is a fickle thing.
Rise from your grave!
Your extermination is imminent.

It is coming for you.
So it shall be.
The end is inevitable.
Unrelenting. All consuming.

Do you feel the chill of death?
It will not be avoided.
The cold darkness consumes all.
The end of times. How quaint.
This tomb will not contain me.

Xatma, Plague Lord of Death
Death waits... this time.
Do you know how hard it is to make friends?
Don't fall asleep...
I suppose you have a little bit of time...
It does get tiresome being so. non-corporeal.
It is getting darker in here, it's not just you.

This will be your downfall.

Your extinction is forthcoming.

Xatma, Plague Lord of Death
Death is unstoppable...
Nothing living escapes this tomb...
Come deeper into the darkness...

This will be YOUR tomb!

Death comes for the strong, too.

The meek will fall.

Worshippers of death itself… they will do nicely.

Into the shadows of death itself...

Stealing from death - how poetic!

Is that your favorite word too?

This one has seen a LOT of death... very interesting.

The Lich King sought mastery over death… but could not escape.

Oooh, you're coming around on it.

Xatma, Plague Lord of Death
It is your nature to fight death. And lose.
You challenge death itself and hope to prevail?
Your light is expiring...

Xatma is unique to Hearthstone. It is one of the five sources of plagues that Rafaam has unleashed into Uldum. Xatma is the embodiment of the Plague of Death.