This article is using {{Card template}}.
See Help:Style guide/Card for how to edit this kind of article.
Edit this article
Wyrmrest Agent
2596 • AT_116
Regular 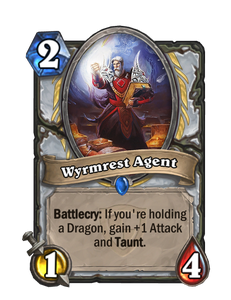 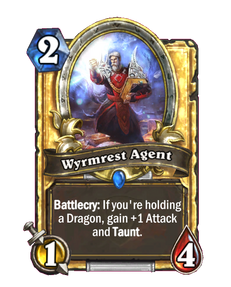 Keeping tabs on the Grand Tournament is priority 1 for the five mighty Dragonflights! 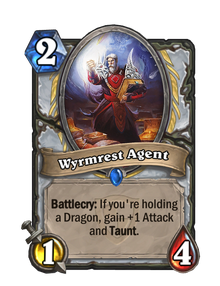 Wyrmrest Agent is a rare priest minion card, from the Grand Tournament set.

Similar to Twilight Whelp, this is a strong early card as long as the priest has a Dragon in their hand. A good early game option for Dragon decks. With its Battlecry activated, this card is strictly better than Silverback Patriarch: it costs one less mana and has one more Attack.

Summon
Are you mocking me?!
Attack
You think this is funny?!

The Wyrmrest Accord was an alliance of four dragonflights — the red, bronze, green, and black flights — created to combat the blue dragonflight's crusade against magic users. The red dragonflight was the most active of the four, with a large number of red dragons guarding Wyrmrest Temple itself.

The Wyrmrest Accord was founded by Alexstrasza following Malygos's declaration of war upon all mortal spellcasters. She gathered together representatives from the other three dragonflights, both to oppose the blue dragonflight and to defend the Dragonblight against the undead Scourge.