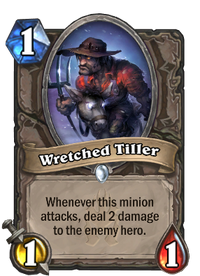 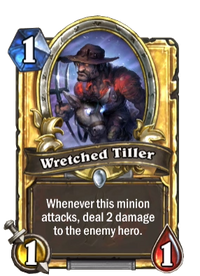 Whenever this minion attacks, deal 2 damage to the enemy hero.

If you ever tried to plow permafrost, you’d be wretched, too.

Wretched Tiller is a common neutral minion card, from the Knights of the Frozen Throne set.

Wretched Tiller can be obtained through Knights of the Frozen Throne card packs, or through crafting.

Wretched Tiller is a card with an interesting ongoing effect. It can be used in early game to either attack the enemy hero for 3 damage or trade for a low health minion and also deal 2 damage to the enemy hero; however its 1 health makes the card quite fragile.

Wretched Tiller is a quite weak pick in Arena. It's stats too fragile to survive a turn and it's a very poor topdeck in the late game when you want to play more impactful cards.