This article is using {{Card template}}.
See Help:Style guide/Card for how to edit this kind of article.
Edit this article
Wrathscale Naga
59710 • BT_355
Regular 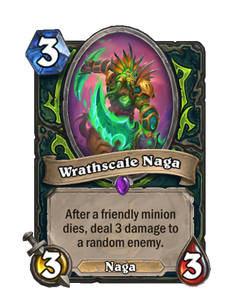 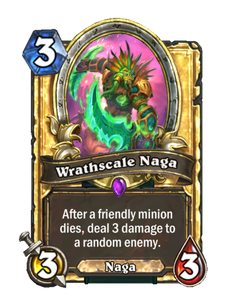 If throwing glaives is what you crave;
summon tokens and make 'em broken. 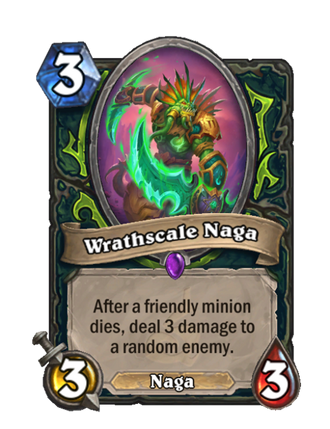 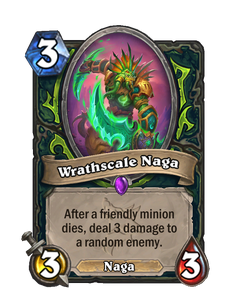 Wrathscale Naga is a huge potential damage source. Because of its fragile statline, it should only be played on a board where you're trading in multiple minions at once. Wrathscale Naga synergizes well with

Command the Illidari, which generate multiple rushing tokens to be sacrificed the same turn they come into play. Be aware that you may not be able to cleanly trade with everything, since Wrathscale Naga can kill enemy minions before you have a chance to attack into them.

Decks that aren't using tokens can instead use

Altruis the Outcast, which provides similar board control and face pressure but is much easier to control. However, it does have far less burst potential.

The Wrathscale are a group of naga based on Azuremist Isle.

Aside from tainting the night elves' ancestral lands, the Wrathscale also pose a direct threat to the draenei and furbolgs of the region. This group of naga is ruled by Warlord Sriss'tiz, who is planning an invasion on the Azuremyst Isles's new inhabitants.