This article is using {{Card template}}.
See Help:Style guide/Card for how to edit this kind of article.
Edit this article
Wrathion
40603 • CFM_806
Regular 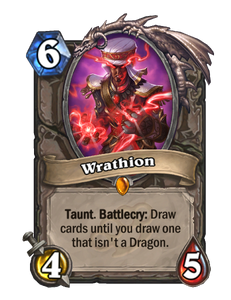 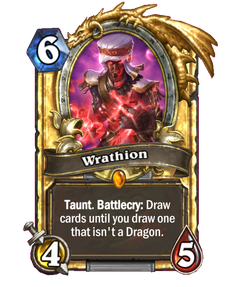 Wrathion, son of Deathwing, is a dragon. Why isn't he tagged as a dragon, you ask? WHAT, ARE YOU TRYING TO BLOW HIS COVER?? 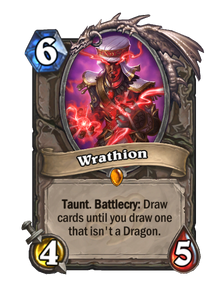 Wrathion is a legendary neutral minion card, from the Mean Streets of Gadgetzan set.

A 4/5 Taunt that draws a single card is sub-par for 6 mana. However, after drawing two cards Wrathion becomes valuable. Drawing additional cards beyond that is extremely powerful. As such, Wrathion should only be used in a deck that runs many dragons, to increase the odds of getting multiple draws. A possible alternative for decks with fewer dragons that still wish for a strong draw card is The Curator.

Wrathion, the Black Prince, is one of the few black dragons on Azeroth known to be uncorrupted by the taint of the Old Gods, and, following the death of Deathwing and the destruction of the corrupted black dragonflight, one of the last known black dragons alive on Azeroth. His disguise is of that a human with dark skin. Claiming to have seen a future where Azeroth falls, Wrathion helps heroes of the Horde and Alliance gain power, usually in the form of magical epic-quality items. He is, however, ruthless in his goals and pursues what he perceives as the greater good for Azeroth with almost fanatical devotion.

As the self-proclaimed last black dragon, Wrathion believes that the titans' mandate to protect Azeroth (once entrusted to his father) now falls to him, and he will do whatever it takes to fulfill this charge.

Judging by his card art, Wrathion appears to have been drawn to Gadgetzan by the Kabal's corrupted red mana, although it is not clear what use he has in mind for this new source of power. His summon quote may refer to his remaining in human form - rather than revealing himself as a dragon - in order to avoid persecution, and he is certainly not the only clandestine draconic member of the Kabal. Given his power and knowledge, Wrathion may be a more significant figure in the gang's operations than it appears, and he certainly has something in common with the Kabal's 'troll' leader, Kazakus.