This article is using {{Card template}}.
See Help:Style guide/Card for how to edit this kind of article.
Edit this article
Worgen Infiltrator
994 • EX1_010
Regular 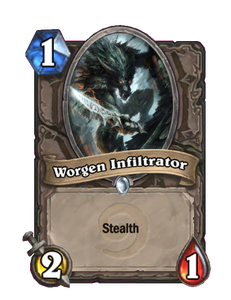 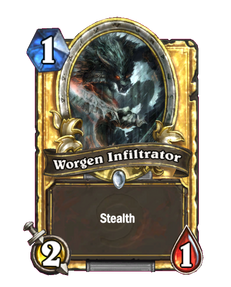 If you want to stop a worgen from infiltrating, just yell, "No! Bad boy!" 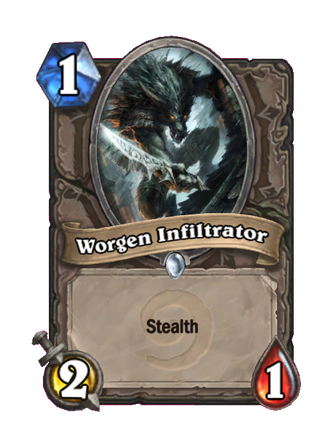 Worgen Infiltrator is a common neutral minion card, inducted into the Legacy set, formerly from the Classic set. 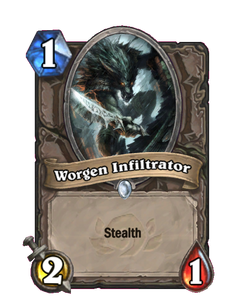 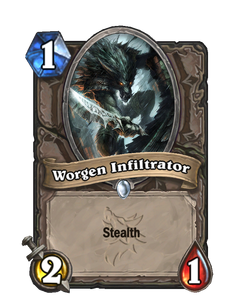 With 2 Attack and Stealth, this 1-mana minion can be reliably used to destroy most 2-cost minions. Its Stealth initially protects it against direct attacks including hero powers such as

Dagger Mastery, making it more effective against these classes than other 1 Health minions. However, it is still very vulnerable to AoE and random attacks such as

In World of Warcraft, Worgen Infiltrator is a level 7 - 8 NPC that can be found in Tirisfal Glades and Silverpine Forest.

The worgen are a race of feral wolf-beasts whose very name inspires fear.

"Led by their indomitable king, Genn Greymane, the proud citizens of Gilneas once stood with the Alliance against the vile orcish Horde that sought to conquer all of Lordaeron. Gilneas survived but, in the years following the Second War, the kingdom drew ever inward. Distrustful of their former allies, the Gilneans erected a mighty wall at the borders of their land, closing off their nation - and their hearts - from an ever-darkening world. Now, many years later, as the seemingly unstoppable undead Scourge marches across Lordaeron, human civilization once again teeters on the edge of destruction. As war and terror close in all around them, the citizens of Gilneas are faced with one, terrible truth: their mighty wall cannot hold back the dead for much longer and, worse, rumors of a new threat have risen within the kingdom's borders of feral, nightmare creatures that walk upright as men but hunt and howl as wolves."

Twisted Worgen is the corrupted version of this minion.