This article is using {{Card template}}.
See Help:Style guide/Card for how to edit this kind of article.
Edit this article
Worgen Greaser
40950 • CFM_665
Regular 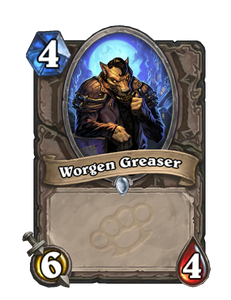 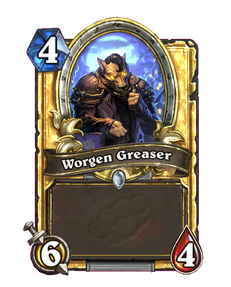 Hair products are 79% of his monthly budget. 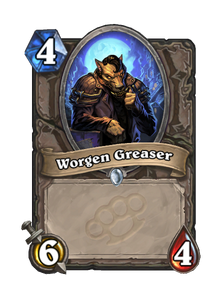 Worgen Greaser is a common neutral minion card, from the Mean Streets of Gadgetzan set.

Despite having a relatively high attack value for a 4 mana minion, its health is a serious disadvantage. It can be easily traded into by many 2 mana minions or weak removal spells. On top of that, its complete lack of abilities gives it no real advantages over other cards. Players with smaller collections should stick with Chillwind Yeti rather than bother with this.

On the off chance your opponent doesn't remove this, its 6 attack is quite impressive. It will usually trade up. It can be worthwhile in Arena sometimes, where removal is less common.

While it's health can be problematic, cards like lightsteed can give it the health buffs it needs to thrive with a quick circle of healing.