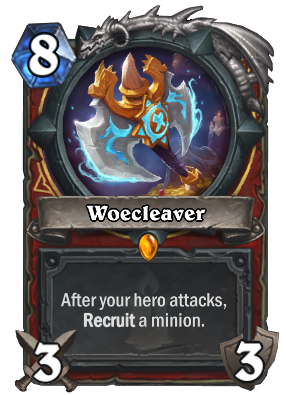 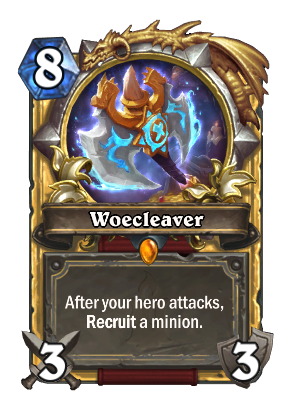 Elite
After your hero attacks, Recruit a minion.
Flavor text

Turn that frown into TWO frowns!

Woecleaver is a legendary warrior weapon card, from the Kobolds and Catacombs set.

Woecleaver can be obtained through Kobolds & Catacombs card packs, or through crafting.

This weapon has rather low stats for its cost, but its ability to Recruit minions over 3 turns can more than make up for its cost over time. Its value shines in a Recruit-focused deck packed with big minions.

You can set up a one-turn-kill by recruiting a huge Charge minion like Grommash Hellscream or Charged Devilsaur then play Inner Rage and Sudden Genesis twice to quadruple its damage output.

Woecleaver is unique to Hearthstone.

In a tale told by a dwarven bard, a group of seasoned adventurers once delved deep into the kobold catacombs in search of the fabled axe, Woecleaver. In the end, after weeks of searching, the group failed and the dwarf Oakheart instead hired his old friend, Marin the Fox, to find the weapon for them. Marin wanted to know how much the venture would pay him; it didn't pay anything, but Oakheart had heard a rumor that Woecleaver was stashed with another treasure that Marin had been searching after for some time - a large chest said to contain items of "particular interest" - which managed to convince the Fox to agree to the undertaking.[1]