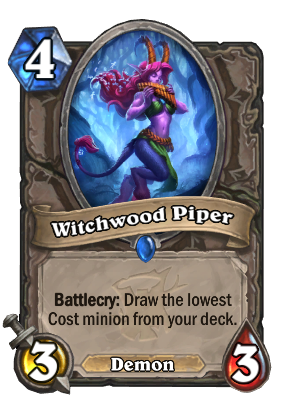 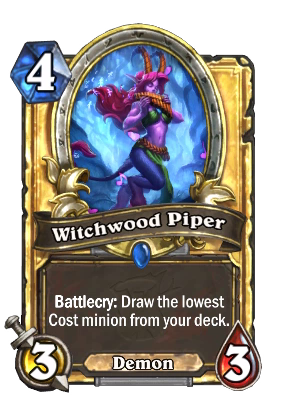 Battlecry: Draw a minion from your deck with the lowest mana cost.
Flavor text

She rids villages of annoying pests, like rats and children.

Witchwood Piper is a rare neutral minion card, from the The Witchwood set.

Witchwood Piper can be obtained through The Witchwood card packs, or through crafting.

Witchwood Piper works well in a deck which depends on a cheap, important minion, such as Prince Keleseth, a 1-drop for Quest Hunter, or Sorcerer's Apprentice in Exodia Mage. It could also be used as a straightforward draw in a Combo deck, particularly Mecha'thun decks, to reach the combo pieces more efficiently.

Warlocks can use the Demon aspect of Witchwood Piper to their advantage using tools such as Sacrificial Pact and Void Analyst.

Witchwood Piper appears to be a female satyr.

Satyrs (sometimes pluralized as satyr) are a race of bestial demons usually sworn to the Burning Legion. They are created through the spreading of the ancient satyr curse, an affliction which originated with Xavius, a Highborne sorcerer who was destroyed and remade into a demonic form as a punishment for his failures by Sargeras during the War of the Ancients. Xavius soon began spreading his cursed form to other night elves and eventually to other races as well. In modern times, satyrs mostly live in various sects throughout Kalimdor and exist only to harry their hated night elf cousins and obey the will of the Legion, though others have instead sworn fealty to the Old Gods and work to spread the influence of the Emerald Nightmare.

It was once stated in the Warcraft Encyclopedia that while there are scattered reports of both male and female satyrs, researchers had failed to secure evidence of female satyrs on Azeroth. However, concept art for World of Warcraft: Legion depicts what appears to be a female satyr, and in-game, the Fallen Priestess confirms the existence of such females. Witchwood Piper marks the first time a female satyr has been depicted in official Blizzard art.

The Witchwood Piper and her flavor text is a reference to the german legend Pied Piper of Hamelin, in which the titular character rids the town of rats, but after the mayor refuses to pay his promised sum, he steals the children.