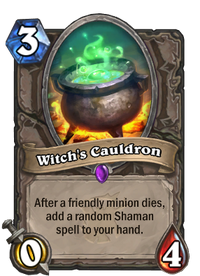 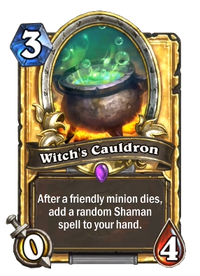 Whenever a friendly minion dies, add a random Shaman spell to your hand.

Eye of murloc, ear of bat, foot of Fordring, fur of cat…

Witch's Cauldron is an epic neutral minion card, from the The Witchwood set.

Witch's Cauldron can be obtained through The Witchwood card packs, or through crafting.

The Witch's Cauldron is a very potent minion when combined with decks that use multiple weak minions, or have a means of summoning minions indefinitely. A notable example of this is Odd Paladin, which can fill their hand completely within a single turn when using their Silver Hand Recruits. Multiple very useful cards can be gained from the Witch's Cauldron, such as Hex, Volcano, Bloodlust, Unstable Evolution, Windfury, and more. However, several "dead" spells can also be gained from the Cauldron, such as Ice Fishing and Totemic Might, which would likely not help a non-Shaman deck, with the exception of Murloc Paladin or other Murloc-centric decks.

In order to use the Witch's Cauldron correctly, care must be taken to keep the Cauldron on the board for as long as possible, whilst trading your minions with your opponent's. If your opponent fails to remove the Witch's Cauldron, win condition cards can be quickly acquired, primarily Bloodlust, which is likely to synergize well with decks that focus on multiple minions, which is the preferred strategy when using this card.

Another valid way to use the Witch's Cauldron is to use board clears to remove your minions, along with your opponents. However, the Cauldron must remain alive afterwards, which makes the use of Whirlwind and Hellfire preferable, whereas a Twisting Nether would not allow the effects to activate, wasting the minion.

Charge and Rush both allow the Witch's Cauldron to have immediate value, as playing it on turn 4, along with a Stonetusk Boar will immediately give you a spell, as long as the Boar dies the turn it's played.

As the Witch's Cauldron does not draw cards but instead adds them to your hand, there is no risk of milling if your hand is full and a friendly minion dies, albeit the spell will not be added to your hand. For this reason, when the Witch's Cauldron is on the board, playing multiple cards per turn is normally a good option, as your hand will generally be filled with Shaman Spells for as long as the Cauldron remains on the board.