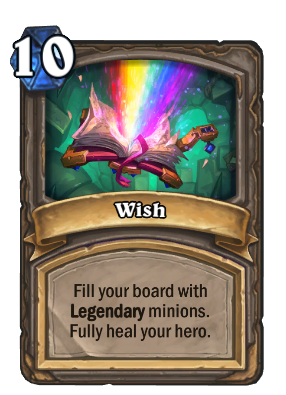 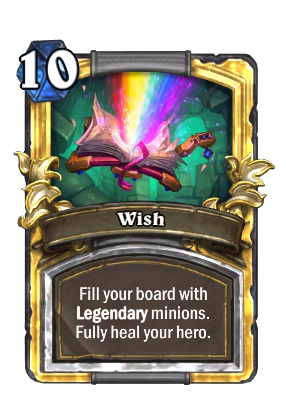 Fill your board with Legendary minions. Fully heal your hero.
External links

For the treasure card in Solo Adventures, see Wish (boss).

Wish is an uncollectible neutral spell card. It is also an ultra rare pool 2 active treasure in Duels.

Wish can be drafted and added to a Duels deck after round 4. However, being an ultra rare treasure, it has only 1% chance to be offered.

Wish is uncollectible and unavailable in any other game modes.

Wish can be considered the ultimate "panic-button" of all cards in Hearthstone. For the very high cost of 10 mana, the extreme rarity of drafting this card, and it's unbelievably powerful and game-changing effect, Wish is easily one of the most powerful cards ever made in Hearthstone. Its effect is utterly devastating to any opponent and extremely likely a game saver for the caster. Because of its high cost and dependence on board state however, most players would likely wish to hold Wish in their hand until it's either one of or the very last option in a match, and rightfully so. The effect of Wish can turn a game from unwinnable to assured victory in a single turn, and completely stump an unwary opponent who would likely have no answer for both a full heal and a board full of all kinds of Legendary minions. Because of this however, any possible counters to Wish must be thoroughly considered before the card is played, so as to not waste it. Any effects that can copy the card into the hand or deck should be considered a high priority if available, as well as any effects that could reduce the high 10 mana cost into something more manageable.

To be considered, however, is that Wish can easily have a much lesser effect or possibly have no effect depending on the board state. A player with a full board but no taunt minions and little health could waste half of Wish's effect, and the inverse of no minions but a high health pool could waste the healing of Wish. That said, if defeat is imminent and you have no answer other than Wish, you should not think twice of using it as it's effect can easily turn the match around in your favor with your opponent scrambling to try and find a way to counter it.