Winter Veil[1][2] (also known as Winter's Veil[3]) is Hearthstone's first seasonal event, running between December and January. Based on the Feast of Winter Veil, Winter Veil celebrates the renewing of the year and the coming of Greatfather Winter to give gifts to the adventurers of Azeroth. The festival is the Warcraft counterpart of Christmas.

The following features were planned for the 2016 event but were removed due to "an operational challenge".[4] The Brawl and card back are however planned to make an appearance "in the new year".[4] 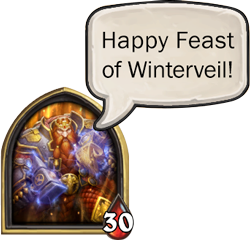 The following features were part of the 2015 event.

Greatfather Winter and his billowing cloak have cast the chilly weather of Winter Veil over the Hearthstone tavern. Now that the ice and snow have arrived, it’s a great time to grab a steaming mug of something tasty, wrap up in a warm blanket, and cozy up to the fire for a few fun rounds of Hearthstone!

Fluffy snow has settled on the eaves and gables of Stormwind and ice over Orgrimmar. During Winter Veil, from the 9th of December through the 6th of January, you’ll get to see each game board decked out in its holiday best. Every Hearthstone hero has gotten into the spirit of the season, and each one will sport a new jolly holiday Greetings emote![1]

The Feast of Winter Veil, also called the feast of Great-Winter, or simply Winter Veil or Winter's Veil, is an in-game, end-of-year, several week long holiday event seeming to be the in-game counterpart of Christmas and other holidays at the end of the year.

Ever consumed with the research of their origins, the dwarves choose to celebrate the season as a recognition of Greatfather Winter himself. They consider him to be the personification of one of the ancients of Azeroth - the Titans. Much as they claim lineage in one degree or another to these mystical beings, they consider their snowy home of Dun Morogh as the prime example of Greatfather Winter's blessings. The holiday was introduced to the Alliance at large by Muradin Bronzebeard.

The tauren and their shamanistic understanding of winter, along with their recent emergence into druidic endeavors, fit in well with the legend of Winter Veil. They focus almost entirely on the renewing aspects of the lore however, leaving legend worship to those races (as they view it) less in tune with the nature of things. Many tauren choose this time as the right time to give thanks for the blessings of their new home in Mulgore.

"Great Father is dropping crates on the battlefield! Get a gift each time you smash your opponent's crate... or your own!"

The patron saint of Winter Veil, Greatfather Winter (also known as Great Father) appears in the Gift Exchange Tavern Brawl, where he drops Winter's Veil Gifts onto the battlefield for both players. If at the start of their turn a player has no Winter's Veil Gifts left on their side of the board, a fresh Gift will be delivered by Greatfather Winter.

Based upon the dwarven accent voice overs during the Tavern Brawl, Hearthstone appears to favour the dwarven version of Greatfather Winter (see below). This fits with the Brawl taking place in Stormwind.

"I have a pretty good idea what ol’ Greatfather Winter’s gonna be doing when this shift is over. I got a bottle of Winter Veil cheer right here in my bag, and I intend to get to the bottom of it." - Great-father Winter

Dwarves have a winter festival where they tell stories about Greatfather Winter; in recent years, more and more humans have been participating in this event.

The term "Winter Veil" is said to stem from a supernatural being referred in many cultures to as Greatfather Winter. As he would walk the land late in the seasons, winter itself would be his billowing cloak. In his wake was the blanketing of the land in snow, and thus it is said that Greatfather Winter would cast his wintry veil over the land. As Greatfather Winter walked Azeroth, it is said he would provide a bounty for those who welcomed his presence. As such, the idea of feasting during the winter veil would bring together communities as they shared whatever they had. Typically, a single day of merriment and feasting welcomed the change, all in anticipation of the land's renewal.

The image of Greatfather Winter is sometimes used, as a harbringer of commercial exploit rather than as a supernatural titan. Greatfather Winter visits the great cities of Ironforge and Orgrimmar - courtesy of the fine folks of Smokywood Pastures and he spreads cheer in celebration for the Feast of Winter Veil. But, all the cheer-spreading makes Greatfather Winter hungry, and he looks for adventurers to get him his daily fix of milk and cookies.

Greatfather Winter is now seen as a kind old dwarf, or orc, who brings presents to everyone. Although many people, such as lorekeepers, have their thoughts about this commercializing of him by the goblins, it is a nice idea nonetheless.