This article is using {{Card template}}.
See Help:Style guide/Card for how to edit this kind of article.
Edit this article
Wing Commander Mulverick
70292 • AV_293
Regular 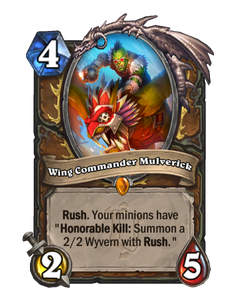 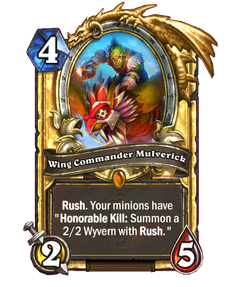 “A board full of 2-Health minions? This is what I call a target rich environment.”

Wing Commander Mulverick is a legendary druid minion card, from the Fractured in Alterac Valley set. 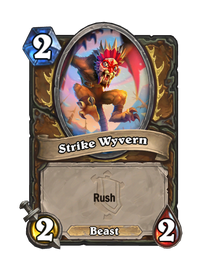 Wing Commander Mulverick is an elite orc serving as lead wing commander of the Frostwolf Clan in Alterac Valley. At the beginning of each match, he is held prisoner at the Dun Baldar North Bunker.

"Mulv" and his Alliance counterpart, Wing Commander Ichman, have since quit their respective jobs in Alterac Valley and made their way to Outland, where they now serve the Dragonmaw clan at the Dragonmaw Base Camp in Shadowmoon Valley. Mulverick, in particular, was disgusted at the Frostwolves for the sheer amount of pathetic whining during battle, and wished to finally be rid of the infernal complaining. While in Outland, Mulverick is friendly to both Alliance and Horde players who have completed the quest Blood Oath of the Netherwing.