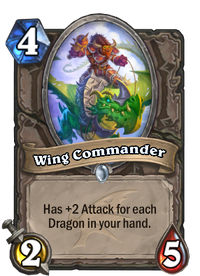 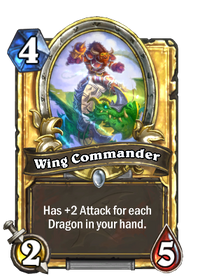 Has +2 Attack for each Dragon in your hand.

Wing Commander is a common neutral minion card, from the Descent of Dragons set.

Wing Commander can be obtained through Descent of Dragons card packs, or through crafting.

This card does well in decks that expect to have a lot of dragons in-hand. Thus, Dragon Warrior decks can use War Master Voone, Dragon Roar, and the additional Scion of Ruin generated by Barista Lynchen or Dragon Breeder to boost the Wing Commander's attack stat to 8 or even 12. A good tactic to surprise your opponent is to play Wing Commander when actually you have relatively few dragons in-hand, causing your opponent to likely ignore it. Next turn, use one of the previously mentioned effects to generate a large number of dragons, increasing Wing Commander's attack exponentially and giving your opponent a nasty surprise. Combo with a Windfury (card) from Zephrys the Great to make an effective finisher.

Summon
Ride the sky, 'til you die!