This article is using {{Card template}}.
See Help:Style guide/Card for how to edit this kind of article.
Edit this article
Windfury Harpy
567 • EX1_033
Regular 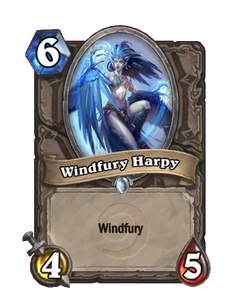 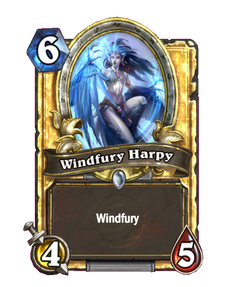 Harpies are not pleasant sounding. That's the nicest I can put it. 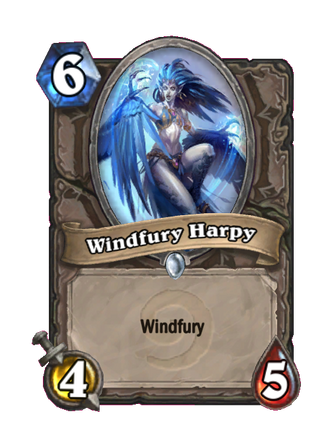 Windfury Harpy is a common neutral minion card, inducted into the Legacy set, formerly from the Classic set. 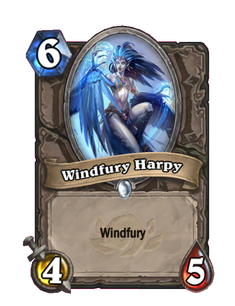 Windfury Harpy can be a powerful damage dealer due to the Windfury ability, potentially leading to devastation of hero Health or of multiple minions, especially if you can buff it. However, it needs to survive a turn in order for it to deal damage. Its low base stats make it weak to trading if the opponent has minions or weapons to attack it it.

Gyrocopter is a straight upgrade to Windfury Harpy. It has Rush so it can be used trade into minions immediately and it's a Mech, so it can receive Mech-related buff effects and can have Magnetic minions attached to it.

Harpies resemble a cross between a night elf female and a hunting bird, with long talons for feet and large graceful wings for arms.

Once content to confine themselves to their ancestral home in the peaks of the Stonetalon Mountains, the feral and vicious harpies of Kalimdor have spread their influence across the length and breadth of the continent. The vicious winged women have taken to raiding unsuspecting caravans and savaging any who cross into their territories. Their nests, littered with the gruesome remains of their victims, are now a common sight from the arid mesas of Durotar to the lush forests of Teldrassil to the icy reaches of the Dragonblight and the Storm Peaks.