This article is using {{Card template}}.
See Help:Style guide/Card for how to edit this kind of article.
Edit this article
Windfury
51 • CS2_039
Regular 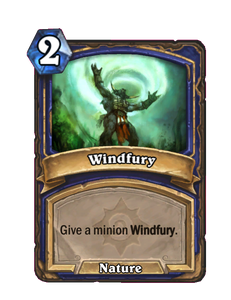 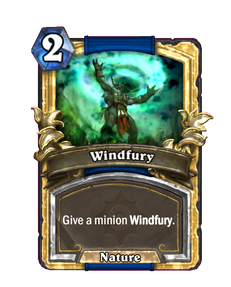 Windfury is like Earthfury and Firefury, but more light and airy. 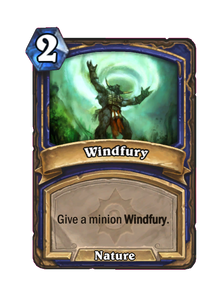 For the ability of the same name, see Windfury.

Windfury is a shaman spell card, inducted into the Legacy set, formerly from the Basic set. 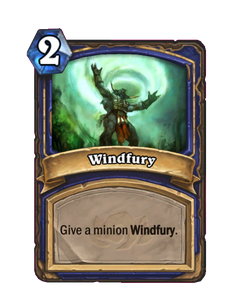 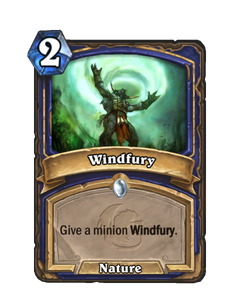 Regular and golden Windfury are uncraftable and cannot be crafted or disenchanted.

Two copies of regular Windfury are obtained for raising shaman to level 1.

Two copies of golden Windfury (Core) are obtained for winning 50 games as shaman.

Windfury (Core) is uncraftable and cannot be crafted or disenchanted.

Especially effective when applied to minions with high Attack, and for dealing damage to heroes or minions with 0 Attack. Note that this will give almost any minion it's cast on a very high soft taunt -- it is best played on a minion that can attack on the same turn, since that minion has a very high chance of not surviving (or being Silenced during) your opponent's next turn.

Windfury is the elemental force of wind that is harnessed by the shaman in the Warcraft universe. Its use in shamanic magic is characterized by allowing the attacker to deal multiple successive strikes from one basic attack.