This article is using {{Card template}}.
See Help:Style guide/Card for how to edit this kind of article.
Edit this article
Wind-up Burglebot
40337 • CFM_025
Regular 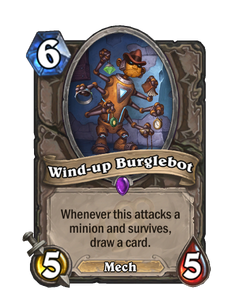 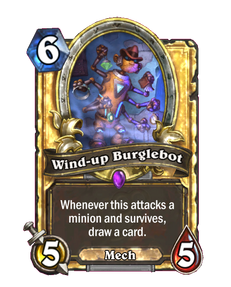 Dimensions: Full • 330 x 410px
Whenever this attacks a minion and survives, draw a card.
Flavor text

Don't blame the bot for his crimes... Blame whoever keeps winding him up! 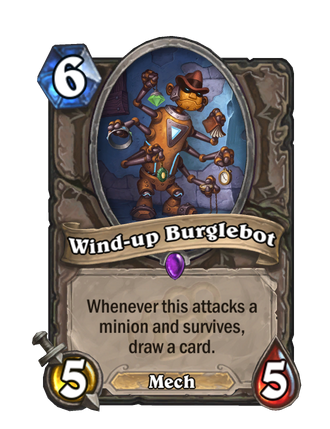 Wind-up Burglebot is an epic neutral minion card, from the Mean Streets of Gadgetzan set.

The Burglebot's stats are poor for its cost, but its triggered effect has the potential to compensate through additional card draw.

Works very well with Divine Shield to ensure its survival in combat. Healing can help it trade repeatedly against smaller minions. Best played behind a Taunt to give it a chance of surviving long enough to draw at least one card. It can be used with Charge on Turn 7 to clear at least 1 minion and provide yourself a card, assuming the Burglebot survives.

Otherwise it is a relatively poor card.

Attack
Do not resist.