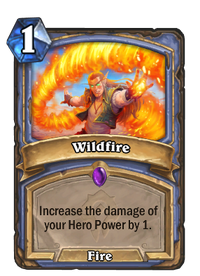 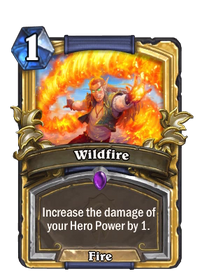 Increase the damage of your Hero Power by 1.
Flavor text

The Barrens were a lush jungle. Then this happened.

Wildfire is an epic mage spell card, from the Forged in the Barrens set.

Wildfire benefits a long-term strategy for Mage decks that have strong Hero Power synergies. While it's comparable to Shadowform in Priest (as both result in a 2-damage Hero Power when first played), Mage has many more ways to make use of the extra damage. In Standard, this archetype is primarily supported by Reckless Apprentice and Mordresh Fire Eye, along with Fallen Hero and Coldarra Drake.

In Wild, Wildfire is a powerful addition to Even Mage. Since your Hero Power only costs 1 in this deck, the damage bonus adds up quickly over time. Alternatively, you could run supporting cards like Spirit of the Dragonhawk, Ice Walker, Pyromaniac, or Jan'alai, the Dragonhawk.