Hearthstone Wiki
Register
Don't have an account?
Sign In
Advertisement
in: All cards, Wild format cards, Pages with no result queries, Forsaken

This article is using {{Card template}}.
See Help:Style guide/Card for how to edit this kind of article.
Edit this article
Wild Pyromancer
1014 • NEW1_020
Regular 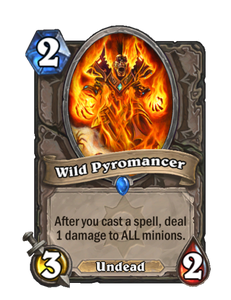 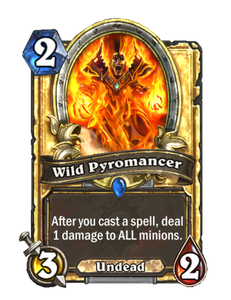 BOOM BABY BOOM! BAD IS GOOD! DOWN WITH GOVERNMENT! 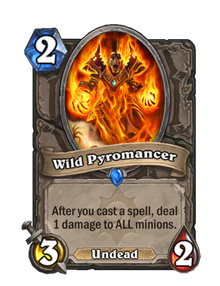 Wild Pyromancer is a rare neutral minion card, inducted into the Legacy set, formerly from the Classic set. 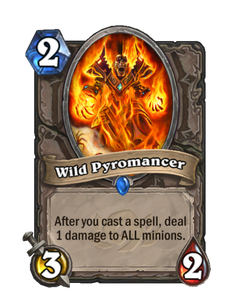 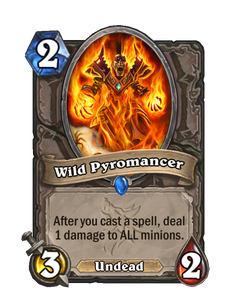 Wild Pyromancer is a great asset if you want to clear the board, or get rid of stealthed nuisances such as Worgen Infiltrator and Patient Assassin. However, due to its double-edged nature, there are a few things to keep in mind when playing this card.

The ability's damage is dealt to ALL minions, meaning your own minions will suffer as well. Healing spells like Circle of Healing or Holy Nova only partly help healing your minions back up, since the ability of Wild Pyromancer occurs AFTER casting a spell, applying 1 fresh point of damage to all minions. This effectively turns Equality into a cheaper Twisting Nether.

Since the Wild Pyromancer only has 2 health, you can use his ability only twice before he is destroyed, unless you raise his health or heal him. For this reason Power Word: Shield is a popular trigger choice for priests, being both protective and card efficient. Priests can generally expect to get the most longevity from Wild Pyromancer, due both to Power Word: Shield and their variety of healing options.

An interesting strategy is to combo Wild Pyromancer with damage-triggered cards, found especially in warrior decks. Pyromancer can trigger several such minions simultaneously, and also opens up chances for a well-timed Execute. Examples include anything with Enrage, Battle Rage, Gurubashi Berserker, Frothing Berserker and Armorsmith. Playing a Commanding Shout keeps the Pyromancer going until your hand is empty of spells and the opponent's minions are burned to a crisp.

For priests, Wild Pyromancer is often combined with Northshire Cleric and either Holy Nova or even Circle of Healing to provide potentially massive card draw. First the Wild Pyromancer is triggered, often using a Power Word: Shield, causing a single point of damage to all targets. The priest then uses the AoE healing spell in combination with Northshire Cleric to draw a card for each healed minion. In many cases the card draw makes this play worthwhile even when it substantially heals the enemy minions, with priests usually aiming to maximise the number of minions on the field before executing this manoeuvre.

Wild Pyromancer is also used as a simple board clear. This is especially effective against weak minions, and in decks which lack other AoE removal options. Bear in mind that the Pyromancer's effect can be triggered repeatedly in order to remove more substantial enemies, or used to add an additional point of damage to a board clearing spell such as Flamestrike or Swipe, effectively acting as Spell Damage. Likewise, the Pyromancer's damage can be used to finish off targets previously weakened by minion attack.

For two mana, this card has good stats, even when not taking the ability into account. With an attack of 3, it can be effectively used as an early game drop just for the stats if you have no other options. The low Health also comes in handy when you want to get rid of the Wild Pyromancer: if the circumstances change in a way that this card would do more harm than benefit to you, its 2 Health ensures it will die in most minion trades. Such circumstances arise fairly often, especially in the early game where the Pyromancer is often capable of removing your own minions, effectively preventing you from playing necessary spells. For this reason it is often worth taking a moment to anticipate future actions before playing the Pyromancer.

A popular strategy is to play Equality with a Pyromancer on the board. This effectively destroys all minions without Divine Shield.