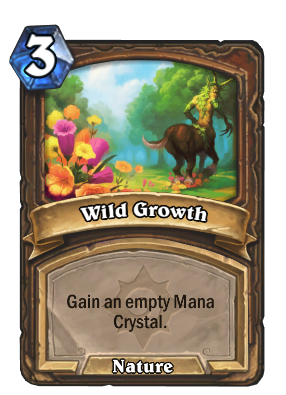 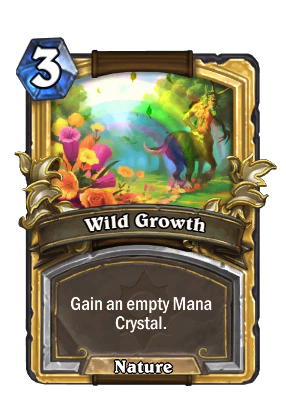 Grow your own mana crystals with this Mana Crystal Growth Kit, only 39.99!

Wild Growth is a druid spell card, inducted into the Legacy set, formerly from the Basic set.

Two copies of regular and golden Wild Growth are automatically given after the player completes the Ranked's New player experience system, unlocking Wild and Classic format.

Wild Growth (Core) is uncraftable and cannot be crafted or disenchanted.

Wild Growth is a key strategic card used to allow the druid to prematurely reach higher numbers of mana crystals, allowing them to put powerful and expensive minions and combos into play in advance of the opponent. By using multiple Wild Growths in combination with Innervate, the druid can place expensive minions such as Ysera or Cenarius onto the board several turns earlier than usual, potentially overwhelming their opponent.

Unlike temporary effects like Innervate, Wild Growth's permanent addition can be made use of for several turns after playing it, with the effect only rendered irrelevant once both players have reached 10 mana. Wild Growth therefore acts to trade tempo on the present turn for increased output capacity on the next several turns, a trade-off which is usually advantageous, provided the break in tempo does not lose the druid too much ground.

Wild growth has a secondary function when a player reaches their mana crystal maximum. If cast when the player already has 10 mana crystals, it will generate an Excess Mana card for the player. They can use this to draw a card for free. This is designed to ensure that Wild Growth remains useful even later in the game, when you already have maximum mana.[1]

Playing Wild Growth on turn 9 provides no advantage as the game's mana progression will provide the player a 10th mana crystal the next turn anyway. The player should think ahead and consider the point at which it becomes more advantageous to hold onto the card until 10 mana is reached, in order to at least obtain an Excess Mana from its use.

Wild Growth is a targeted AoE druid heal over time spell from World of Warcraft. It heals several of the most injured allies within 30 yards of the selected target, healing quickly at first and slowing down as it reaches its full duration.