This article is using {{Card template}}.
See Help:Style guide/Card for how to edit this kind of article.
Edit this article
Wickerflame Burnbristle
40636 • CFM_815
Regular 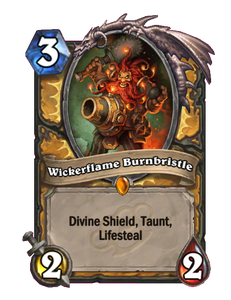 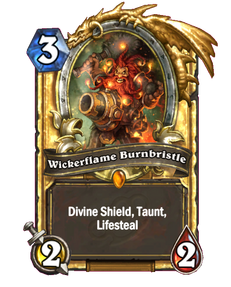 Wickerflame spent years as a recruit for the Goons, never making the big-time because he always fired his chest-cannon too slowly. "Hey," he thought, "maybe if I keep my beard lit on fire, I can do this faster." BOOM, promoted. 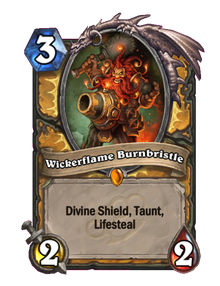 Wickerflame Burnbristle is a legendary paladin minion card, from the Mean Streets of Gadgetzan set.

This card is a strong early game anti-aggro card, providing a strong balance of durability to hold off minions, usually deals enough damage to kill them, and heals back some of the life lost earlier. But in order to take advantage of its Lifesteal effect, Wickerflame will require buffs in order to take full advantage of the healing he provides. A straightforward method would be to buff it with cards like Blessing of Kings as soon as he's on the board, but because he doesn't immediately give value when played nor has a Deathrattle to compensate for is he's hard removed, prematurely buff him is a risky move against classes with easy removal options.

Burnbristle can block some damage, while healing you, and considering his low cost but great flexibility, makes him perfect for almost every deck type. Some cards like Sword of Justice and Call to Adventure can boost him very well.

Even being a low cost card, he is very valuable, so, Redemption and Desperate Stand will give him defensive resources. Remember that, when he is resurrected, his Divine Shield will be restored.

He can be played along with The Glass Knight, providing her more and more Divine Shield, or, an alternate way when you don't have spells or other healing options.

As a result, Wickerflame works well with cards that buff minions in hand, such as Smuggler's Run, Grimestreet Enforcer and Don Han'Cho, allowing the player to save their direct buffs for more immediate returns.

Wickerflame is unique to Hearthstone. He is a dwarven member of the Grimy Goons who has built a cannon into his chest armor, and for the sake of efficiency he doesn't use his hands to light the cannon's fuse; instead, he simply keeps his beard on fire. He is "not insane at all, just efficient".[1]