This article is using {{Card template}}.
See Help:Style guide/Card for how to edit this kind of article.
Edit this article
White Eyes
40486 • CFM_324
Regular 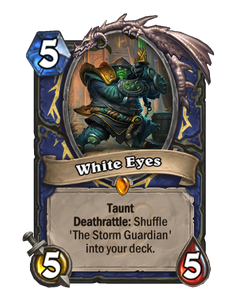 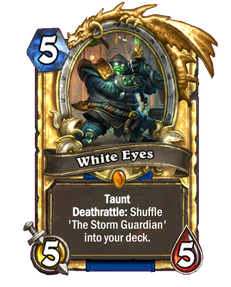 My life for Aya! 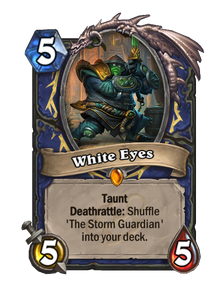 White Eyes is a legendary shaman minion card, from the Mean Streets of Gadgetzan set. 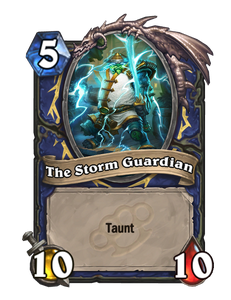 White Eyes himself is a regular Taunt minion with acceptable stats, but what makes him powerful is his Deathrattle, shuffling The Storm Guardian into the player's deck. This extraordinarily powerful 10/10 Taunt minion costs only 5 mana, but may take some time to surface into the player's hand. Card draw effects like Mana Tide Totem, Ancestral Knowledge and Coldlight Oracle can help to cycle the player's deck quickly, making sure The Storm Guardian is drawn in time. In this respect White Eyes is a lesser Elise Starseeker, providing a weaker but more easily obtained win condition.

White Eyes's Deathrattle is best negated before it can be triggered, through Silences or transform effects. Alternatively, mind control effects can be used to steal White Eyes before then triggering his Deathrattle for yourself. Cards such as Thoughtsteal and Drakonid Operative can copy the Storm Guardian in an opponent's deck, placing the copied card in the player's hand.

Summon
My life is your shield.

"Until then, they frighten each other with stories of our leader, saying things such as, “Hey, watch yer back, or White Eyes’ll jump outta da shadows and getcha” with that ridiculous accent. Nonetheless, the rumors surrounding White Eyes are surprisingly close to the truth. He is a powerful warrior—we know him to be as immovable as a mountain and as pitiless as a storm—but the taletellers are missing one important detail. A secret most of our family does not even know. He is not the leader of the Jade Lotus. He’s merely a figurehead, and the real power behind the Jade Lotus comes in a smaller—though no less dangerous—form. . . ."[1]

White Eyes is unique to Hearthstone. An enormous pandaren, he is the sworn bodyguard of Aya Blackpaw, the true leader of the Jade Lotus, who issues commands to the rest of the organization through her loyal servant.[1] In addition to being as immovable as a mountain and as pitiless as a storm, White Eyes is also "as swift as lightning". His shoulderpad is an ancient and extremely heavy pandaren bell, while his gauntlets are made from empty brewmaster kegs, thus demonstrating his immense size and strength.[2]