Whispers of the Old Gods is the third Hearthstone: Heroes of Warcraft expansion, following The Grand Tournament.

For countless millennia, the Old Gods have slept. Now, the time of their awakening draws near; their evil influence has crawled even into the tavern! Can you feel your cards trembling in their decks as the corruption spreads? Some of your old friends have already grown icky masses of tentacles and a downright frightening number of eyeballs!

Of course, while some would recoil at these cards, a resourceful player like you might just be able to harness the power of the Old Gods. Yeees, surely nothing could go wrong...

Can you hear them, beckoning to be played? Will you heed their whispers at your ear?

The Old Gods reward those who answer their call. One hundred and thirty-four new cards are at your disposal to terrorize your opponents. Try not to get too much ooze on you as you plunge into the newest expansion for Hearthstone!

Four Old Gods are waiting for you to add them to your collection, ready to devour your opponents: C'Thun, Yogg-Saron, Y’Shaarj, and N’Zoth. Of course, where there’s a god, there’s a cult, and C’Thun especially is bringing plenty of friends to the table.

Having slept for aeons, the Old God of madness and chaos cannot wait to be in your deck now that he is finally awake. When you grab your first Whispers of the Old Gods pack, you will also receive the legendary C’Thun and two Beckoner of Evil cards! 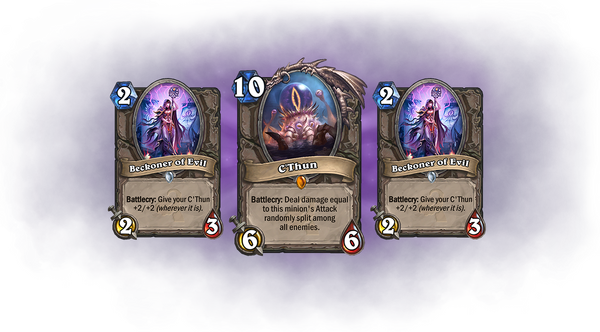 The Old Gods’ aura of corruption has taken hold of the cards themselves, adding twisted new versions of a few familiar faces to the mix.

Starting March 14, you’ll be able to pre-purchase a 50-pack bundle of Whispers of the Old Gods card packs for $49.99 USD prior to the Expansion’s official release. Your dedication will be rewarded with a terrifyingly terrific new card back as a pre-purchase bonus!

Retrieved from "https://hearthstone.fandom.com/wiki/Whispers_of_the_Old_Gods?oldid=32988"
Community content is available under CC-BY-SA unless otherwise noted.