Hearthstone Wiki
Register
Don't have an account?
Sign In
Advertisement
in: All cards, Wild format cards, Troll art,
and 2 more

This article is using {{Card template}}.
See Help:Style guide/Card for how to edit this kind of article.
Edit this article
Whispers of EVIL
54872 • DRG_301
Regular 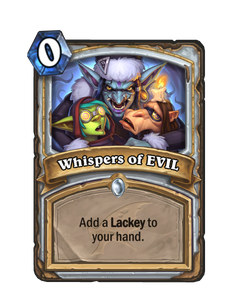 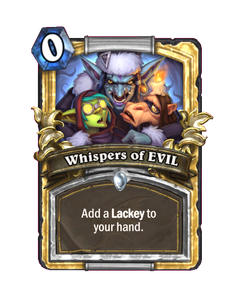 Madame Lazul’s ASMR program is off to a promising start! 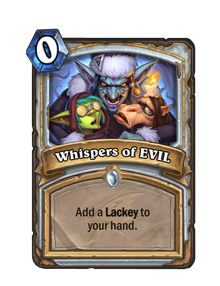 Whispers of EVIL is a common priest spell card, from the Descent of Dragons set.

Whispers of EVIL generates one of the following cards at random.

This card is effectively equal to including a Lackey in your deck, since this is the only way to generate them for 0 mana. It can be risky to play this for tempo, however. Faceless Lackey is the best result, while Ethereal Lackey and Draconic Lackey are okay plays on turn 1. However, three of the others require a minion in play and Kobold Lackey is fairly weak just used on your opponent's face, making them far weaker as a pull.

As a 0 mana spell, Whispers of EVIL also has applications with spell-related effects like Kael'thas Sunstrider and Gadgetzan Auctioneer.

The card depicts Madame Lazul hypnotizing a Goblin Lackey and Kobold Lackey, possibly explaining how the League of E.V.I.L. has so many "willing" servants.