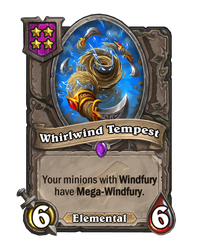 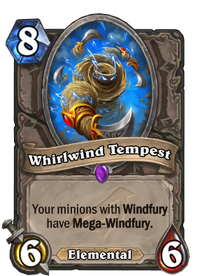 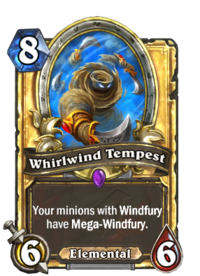 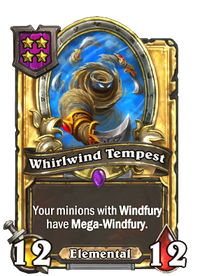 Your minions with Windfury
have Mega-Windfury.

Whirlwind Tempest was a Tier 4 minion in the Battlegrounds game mode.

Despite its fairly limited application, being that there are only four minions in Battlegrounds that can gain Windfury, Whirlwind Tempest's effect can be very powerful on a huge Windfury minion. Its most obvious synergy is with Crackling Cyclone, which is the same tribe and its Divine Shield will make it more like to survive more than two hits after receiving buffs, as is Amalgadon. Seabreaker Goliath and Zapp Slywick are less effective as the former is highly tribe-focused (but has potential as a filler minion if your Seabreaker Goliath is huge) and the latter will likely not need extra attacks to snipe key enemy minions.

Whirlwind Tempest is great with Al'Akir, since he can give any minion Windfury. This gives him more choices to abuse Mega-Windfury with, such as a Cave Hydra or Wildfire Elemental.