This article is using {{Card template}}.
See Help:Style guide/Card for how to edit this kind of article.
Edit this article
Whirlwind
636 • EX1_400
Regular 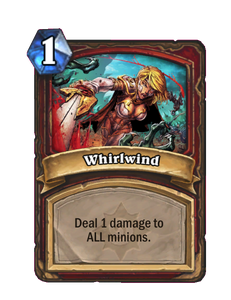 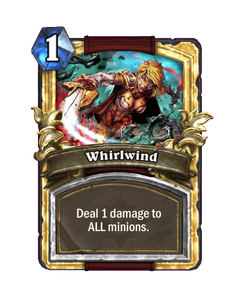 The way to tell seasoned warriors from novice ones: the novices yell "wheeeee" while whirlwinding. 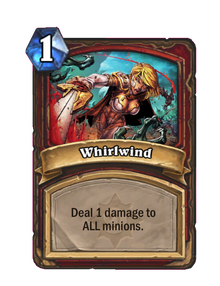 Whirlwind is a warrior spell card, inducted into the Legacy set, formerly from the Basic set. 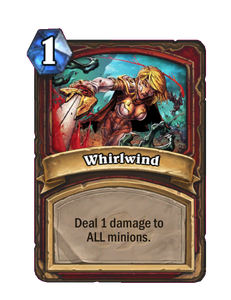 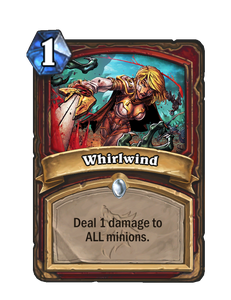 Regular and golden Whirlwind are uncraftable and cannot be crafted or disenchanted.

Two copies of regular Whirlwind are obtained for raising warrior to level 1.

Two copies of golden Whirlwind (Core) are obtained for winning 50 games as warrior.

Whirlwind (Core) is uncraftable and cannot be crafted or disenchanted.

Whirlwind deals damage to ALL minions on the field, including friendly minions. It is a key warrior area of effect (AoE) damage card, since it has utility both as a form of multiple or even single-target removal, and as a way to activating damage-triggered effects, a key characteristic of the warrior class.

As removal, Whirlwind is a simple if two-sided effect, particularly useful with multiple small enemy minions on the board, as commonly used by aggro and zoo decks. The player must always weigh the damage to their own minions against the damage to the opponent's, making this spell most desirable when the player has few or no minions on the board, or when the enemy targets cannot be allowed to survive the turn.

However, Whirlwind truly shines as a means of activating damage-triggered effects, whether Enrage minions such as Raging Worgen and Amani Berserker, single-target on-damage effects like Axe Flinger, or wider effects such as Armorsmith or Frothing Berserker. Frothing Berserker in particular can make use of a single Whirlwind to immediately gain as much as 14 Attack, making the two cards a potentially game-winning combination, while Armorsmith can help mitigate the cost of playing Whirlwind with friendly minions on the board.

This card combos well with Battle Rage to damage everything on the board then draw a card for every damaged friendly character.

As a single point of damage, Whirlwind can also be useful for removing Divine Shield, in anticipation for more substantial attacks.

Whirlwind is a melee-range area of effect warrior attack. The warrior attacks all enemies within 8 yards in a whirl of steel, causing a percentage of weapon damage to each enemy. Whirlwind is an effective way of dealing damaging to multiple targets, and is only desirable when attacking groups of enemies. Unlike its appearance in Hearthstone, it does not deal damage to friendly targets.