Edit
watch 02:53
GTA: The Criminal Enterprises - The Loop
Do you like this video?
Play Sound
Wee Whelp
Regular 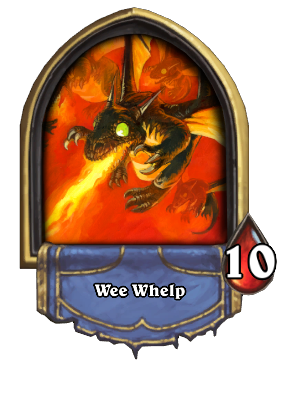 It's just a baby dragon. But it's still a dragon.
External links

For the minion card of the same name, see Wee Whelp.

The Wee Whelp is an easy fight and can be handled by simply going face with some classes. However, the most optimal way to deal with it is by board control. The Wee Whelp has a buff deck, with minions getting stronger by other cards. This can easily overwhelm you. To win against the whelp is to drop minions on the board, and trade or go face. Should you hold the board, its hero power will only slow you down.

Wee Whelp
Not the mamma!