This article is using {{Card template}}.
See Help:Style guide/Card for how to edit this kind of article.
Edit this article
Webspinner
1860 • FP1_011
Regular 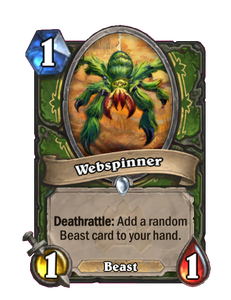 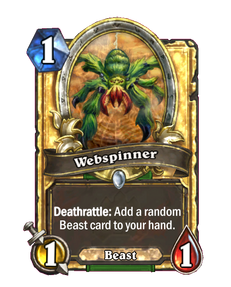 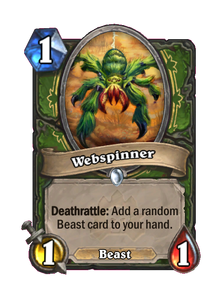 Webspinner is a common hunter minion card, from the Naxxramas set. 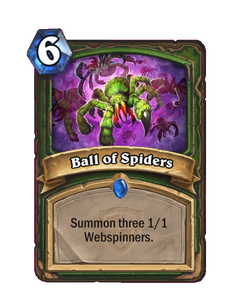 A solid 1 mana minion that cycles itself with another Beast. The body provided by Webspinner is useful for follow-ups such as Crackling Razormaw or Fresh Scent.

Jeweled Macaw is a similar minion, but offers a card faster, potentially immediately creating a 2-mana Beast for your Mana curve. However, it lacks synergies with cards like Feign Death, Play Dead, and Necromechanic, giving Webspinner an edge in Deathrattle heavy builds.

Shimmerfly is another alternative to Webspinner. Hunter spells are generally more powerful than a random Beast, but Beasts will more consistently synergize with cards like Kill Command and Dire Frenzy.

A list of collectible Beast minions in Standard and Wild can be found here.