This article is using {{Card template}}.
See Help:Style guide/Card for how to edit this kind of article.
Edit this article
Weasel Tunneler
40549 • CFM_095
Regular 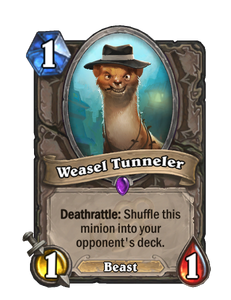 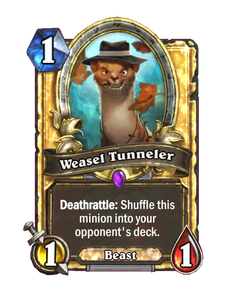 He's the reason the First Bank of Gadgetzan has steel floors. 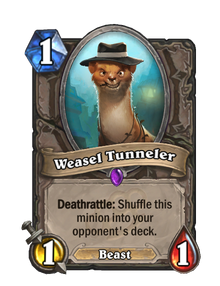 Weasel Tunneler is an epic neutral minion card, from the Mean Streets of Gadgetzan set.

Weasel Tunneler offers an interesting - albeit gimmicky - way to counter combo and control decks. By shuffling itself into the opponent's deck, it adds in a chance of them drawing a "dead card", delaying them from drawing a high-cost minion or a combo piece. However, when your opponent does draw the Weasel Tunneler, they can do the same back to you. With two Weasel Tunnelers, it also counters Reno deck archetypes - like a Beneath the Grounds for any class.

An alternative strategy is to flood the opponent's deck with Weasels. Priest can create as many duplicate Weasels with cards like Twilight's Call, Mirage Caller, N'Zoth, the Corruptor, Grave Rune, and Carnivorous Cube, while also benefiting off of them with Awaken the Makers. Currently, this job is better done with Bad Luck Albatross, although it does give Shadowreaper Anduin a low-cost card to refresh the Hero Power with.

You can use this card with Wyrmrest Purifier to transforms Weasel Tunnelers the opponent shuffles back to your deck to mostly likely better cards.