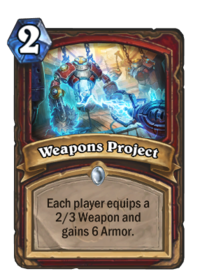 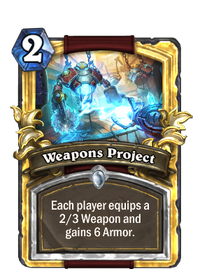 Each player equips a 2/3 Weapon and gains 6 Armor.
Flavor text

Harrison Jones was kicked off this project.

Weapons Project is a common warrior spell card, from The Boomsday Project set.

Weapons Project can be obtained through The Boomsday Project card packs, or through crafting. 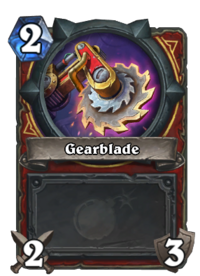 Weapons Project fills a variety of roles for control Warrior decks, despite its double-edged effect. Its primary strength is in generating a burst of Armor, empowering a Shield Slam or Reckless Flurry for a low price. While the same amount of Armor makes the opponent live longer, in the long run the Warrior's health pool will outpace them. The Gearblade can be used for extra removal, and by giving the opponent a weapon, it can be used to forcibly replace valuable weapons like a Doomhammer or Skull of the Man'ari and used to draw additional cards with Harrison Jones, or at the least be removed with Acidic Swamp Ooze to negate the opponent's upside.