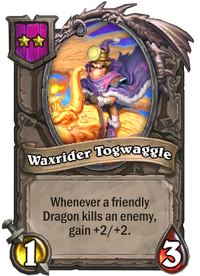 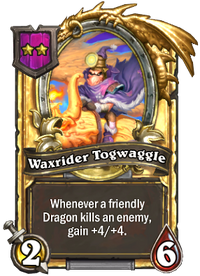 Whenever a friendly Dragon kills an enemy, gain +2/+2.

Waxrider Togwaggle is a Tier 2 minion in the Battlegrounds game mode.

Waxrider Togwaggle is comparable to Wrath Weaver, as both gain scaling +2/+2 boosts using the tribe they synergize with. While Wrath Weaver gains stats in the Recruit Phase, Togwaggle gains stats in the Combat Phase. As a result, it is hard to keep him alive due to his lack of a tribe preventing him from being buffed during the Recruit Phase, but he may be able to win you the round (or at least draw) if he manages to survive.

Waxrider Togwaggle's ability triggers if one of your Dragons defeats an enemy minion in combat (as either attacker or defender) or kills a minion using its ability, such as Red Whelp or Herald of Flame. Using a few Red Whelps, they may be able to buff Togwaggle before combat. Without them, he is vulnerable to being sniped by randomly-aimed damage such as an enemy Red Whelp and Soul Juggler. Zapp Slywick also counters him effectively.

Later in the game, whether Waxrider Togwaggle stays relevant in late-game compositions depend on the opponent's lineup. Against opponents that use many token minions like Beast builds and some Mech and Demon builds, he can continuously get buffed and reach very high stats relatively easily. Against other builds, he should be dropped and replaced with stronger minions.