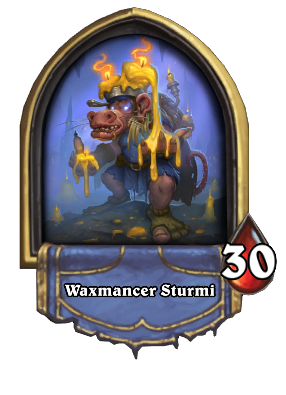 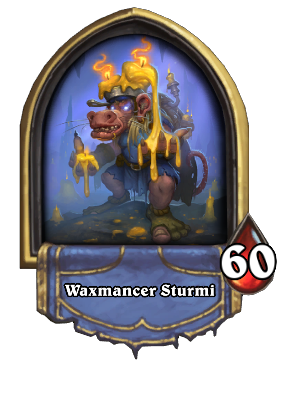 This kobold can\ncandle-craft\nminions at will.
External links

Waxmancer Sturmi is a boss that can be encountered during the Dungeon Run.

Rank 1
Sturmi's deck is a Deathrattle-oriented Hunter deck, which synergizes with her Hero Power to get more opportunities to trigger Deathrattle effects. Her Hero Power can target minions on either side of the board, and gravitates towards activating on the strongest Deathrattle minion.

It would be best to kill her Deathrattle minions as quickly as possible so there is nothing worthwhile for her to copy. Be wary of the actual Deathrattle effects and plan around them, especially if it's the effect of Sylvanas Windrunner. Be careful if you use minions with non-Battlecry effects, which can be turned against you if her Hero Power targets them.

Rank 2
For Rank 2, Waxmancer Sturmi has the same hero power but it costs 3 and can duplicate a minion in its entirety. Sturmi gets a lot harder, necessitating priorities and strategies. You should focus on playing small minions in the first few rounds as she would not get much value by coping them. Equally valuable are cards that require synergy to be effective, such as cards that buff only specific types of cards, such as demons, totems or silver hand recruits. Similar to Rank 1, avoid certain deathrattle minions such as Sylvanas Windrunner. In the mid-game focus on maintaining the board with minions and spells for board removal. Once you made it to the late game, you may play big minions, but make sure they are not by themselves as Sturmi can counter them. The only advantage you gain at this point is that Sturmi can only copy one minion at a time.

Both
Note that Sturmi's Hero Power follows the same targeting rules the player experiences. If any minions are protected by Stealth, like with Cloak of Invisibility, or cannot be targeted by spells or Hero Powers, she cannot copy them. Avoid playing Wax Rager against her, as it would have disastrous consequences if she gets an endless number of them, even with her first-tier Hero Power.

Waxmancer Sturmi
Oh, he just keep coming, don't he?
Ho, he does not quit!