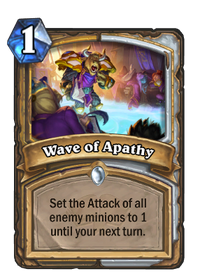 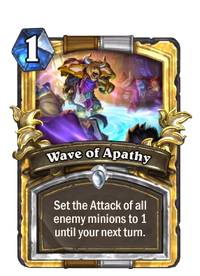 Set the Attack of all enemy minions to 1 until your next turn.

Wave of Apathy is a common paladin/priest spell card, from the Scholomance Academy set.

Wave of Apathy can be obtained through Scholomance Academy card packs, through crafting, or as an Arena reward.

Wave of Apathy can be considered a stronger variation of Pint-Size Potion as its effects lasts for your opponent's turn as well. Depending on the kind of deck you're facing, this can trivialize the threat posed by enemy minions with high Attack for your turn, and make it harder for your opponent to trade into your minions or deal significant amounts of direct damage. On the other hand, aggro decks that rely on smaller minions like Zoolock and Totem Shaman aren't as affected by this spell unless they've been buffed.

While this spell is available to two classes, Priests have more synergy with this spell's effect due to several Mind control effect cards they have access to such as Cabal Acolyte and Cabal Shadow Priest.

As with Pint-Size Potion, this card allows for a full board wipe when combined with Shadow Word: Horror or Mossy Horror in Wild, and grants Paladin decks access to this combo since Mossy Horror is a neutral card.