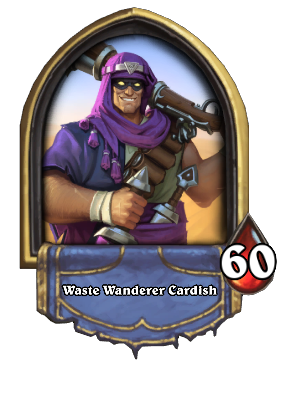 Even if he bombs, he's having a blast freelancing for E.V.I.L.

Waste Wanderer Cardish is a boss that can be encountered initially in Chapter 2 of Tombs of Terror. After completing Chapter 2, this boss encounter will be available in any completed chapter.

Waste Wander Cardish revolves almost entirely around face damage. Whether or not the player targets his minions, their deathrattles will trigger, collectively dealing large amounts of damage to the hero. Due to his cheap cards and hero power, he gains a huge advantage in tempo over the player. His main weaknesses are Mass Dispel, Addarah and House Special (Band of Scarabs also can slow down his hero power). An aggro deck with the treasures Tracking Device, Alchemist's Stone, Primordial Bulwark or Crook and Flail may give a better chance at beating him.

Waste Wanderer Cardish
I got something special to deal with you.
I thought the murlocs were on our side! (vs. Sir Finley)
Reno Jackson
Hey! That big smile... that's my thing!

Waste Wanderer Cardish
Direct hit!
How 'bout some BOOMshot?
Oh yeah! Keep lining up for me!
This's why they pay me the big bucks!

Waste Wanderer Cardish
At least E.V.I.L..'s got good dental...
Do these clowns really think they can stop us?
Jokes on you, I don't even KNOW the secret plan...

Get out there and do some evil!

This thing shoots fast, too!

Right between the eyes...

Those ain't yours! Knock it off!

Brought a gun to a gun fight, then?

Hey! That's not standard issue! Where'd you get it?!