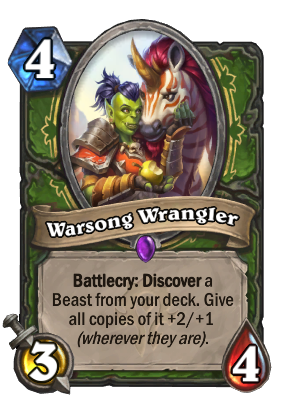 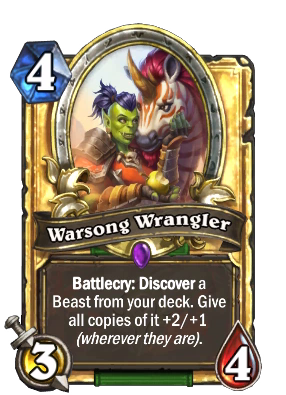 Battlecry: Discover a Beast from your deck. Give all copies of it +2/+1 (wherever they are).
Flavor text

"Me? Playing favorites? I love my beasts all the same!"

Warsong Wrangler is an epic hunter minion card, from the Forged in the Barrens set.

At worst, this card is similar to a Selective Breeder that also gives the Beast you pull an extra +2/+1. Warsong Wranger's relatively high cost makes it much slower than that card, but it can still be useful in a deck that relies on one or two particular Beasts to close out a game. For example, it can fetch a combo piece in a combo deck (most typically King Krush or Tundra Rhino) or pull out a Beast that synergizes well with stat boosts in a handbuff deck.

If you want to squeeze as much value as possible from Warsong Wrangler's stat bonus, then filling your deck with copies of the same minion is the way to go. Dire Frenzy is possibly the most iconic option, and it can be used on any Beast. Sunscale Raptor adds a copy of itself to your deck via its Frenzy effect, and Wrangler will buff the original one if it's still alive when the Battlecry goes off. Trampling Rhino is another common pick in Standard which also synergizes with Warsong Wrangler for tempo, due to it costing 1 mana more.

In Wild, Queen Carnassa (the reward for completing The Marsh Queen) shuffles 15 identical raptors into your deck, all of which will get a bonus if one is drawn with Warsong Wrangler.