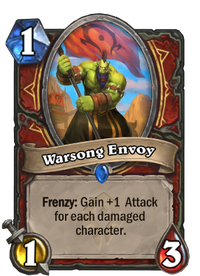 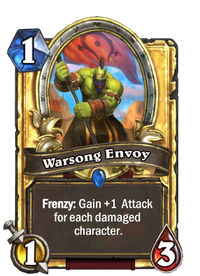 "What do you mean we didn’t give the flag to the Druid?"

Warsong Envoy is a rare warrior minion card, from the Forged in the Barrens set.

This minion has good stats for its cost with an interesting effect, but typically won't go above a 2/2 in most situations. It is still good to play in more proactive and aggressive decks as one of the cheapest Warrior minions.

Warsong Envoy does have synergy with Overlord Saurfang, but unlike frenzy minions with more immediate effects, like Stonemaul Anchorman or Taurajo Brave, Warsong Envoy's low health and high attack make it comparable to a Magma Rager with just 1 more health, which is typically not worth including in most decks when there are much better options. Barrens Blacksmith and Rokara can potentially alleviate this by giving it more health.

The Warsong Envoys were the battlemasters, NPCs located in capital cities that could teleport players to the PvP battlegrounds. Battemasters were eventually removed following the Mists of Pandaria expansion since the Looking for Group tool supplemented the need for them. This NPC teleported players to Warsong Gulch, with his art portraying him as holding the Horde flag from the battleground.