This article is using {{Card template}}.
See Help:Style guide/Card for how to edit this kind of article.
Edit this article
Warsong Commander
1009 • EX1_084
Regular 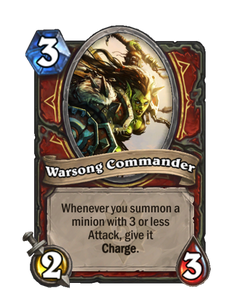 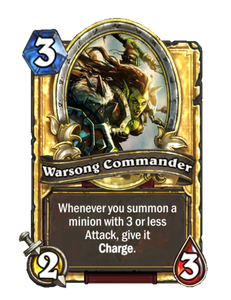 Dimensions: Full • 330 x 410px
After you summon another minion, give it Rush.
Flavor text

The Warsong clan is such drama. It's really not worth it to become a commander. 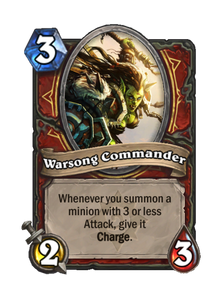 Warsong Commander is a warrior minion card, inducted into the Legacy set, formerly from the Basic set. 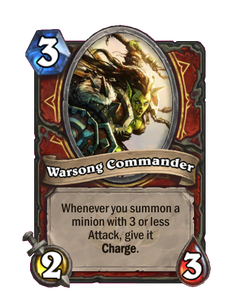 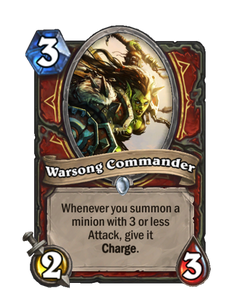 Regular and golden Warsong Commander are uncraftable and cannot be crafted or disenchanted.

Two copies of regular Warsong Commander are obtained for raising warrior to level 2.

Warsong Commander (Core) is uncraftable and cannot be crafted or disenchanted.

Warsong Commander was first publicly changed during the closed beta with Patch 1.0.0.4458. The minion's previous ability had been Your other minions have Charge. This allowed warriors to use Warsong Commander to send even large minions such as Boulderfist Ogre immediately into battle, presenting something close to a win condition if the player was able to keep the Commander on the board, especially once higher levels of mana were reached. A more extreme combination involved using Youthful Brewmaster at low Health to repeatedly play Molten Giant, dealing huge amounts of damage in one turn.[1] The card was therefore changed to read Whenever you summon a minion with 3 or less Attack, give it Charge.

This version of the card saw minimal use in the meta, although it remained effective in certain combo decks, such as those revolving around Frothing Berserker and Raging Worgen one turn kills. Later in 2014 bugs caused the card to no longer grant Charge to cards whose Attack was increased through Battlecries, most notably impacting Bloodsail Raider; the card also often failed to grant Charge to minions summoned by other minions, such as Harvest Golem's Damaged Golem. Both of these bugs further reduced the card's popularity.

With the release of Blackrock Mountain in April 2015, Warsong Commander saw new potential with the introduction of Grim Patron. The previous bug preventing the card from granting Charge to minions not played from the hand was fixed in time for the release of the adventure, allowing Warsong Commander to grant Charge to an almost endless series of Grim Patrons in a single turn. The presence of any enemy minion with less than 3 Attack could be attacked into by the Patron to create another Grim Patron with Charge, which could in turn attack a weak enemy minion, again creating another Grim Patron which also had Charge, and so on. The result was an extremely powerful deck capable of delivering devastating one turn kills, and performing extremely well against other decks in the meta. Decks were quickly built around this combination, along with Frothing Berserker and activators such as Whirlwind, and soon rose to be considered by many one of the most powerful decks in the game.

However, the non-interactive nature of this deck, along with its high popularity (and notoriety) among players led in late 2015 to Warsong Commander being nerfed, with its text changed to Your Charge minions have +1 Attack. The deck had long drawn comparisons to Miracle Rogue both for its non-interactive play, as well as its challenging complexity to play properly. The developers stated that they "felt this change was necessary to help expand both future design space and to stand by our overarching game philosophy that battles between minions and fighting for board control is what makes Hearthstone fun and compelling."[2] Most importantly, the developers realised that the ability to grant Charge was simply too powerful, and that without removing this entirely, the card would remain "so dangerous it would definitely be a problem again in the future."[3] Ben Brode stated that the card's design had also long inhibited the design space for low-Attack cards, including the neutral prototype of Dreadsteed, which was originally planned as part of Curse of Naxxramas, but had to be cancelled due to its synergy with Warsong Commander allowing players to "slowly machine-gun down every minion on your opponent's board". However, Brode admitted that the new card "isn't good", and that it would "take [warriors] down a peg" in the Arena.[1]

The new text was chosen based on several factors: the developers wanted to stay true to Warsong Commander's Charge theme; they wanted the card to continue its role as a build-around for warrior decks; and if possible they wanted to keep its stats as similar as possible.[1][4] After trying "30 or 40 different designs", the final text was chosen, due to best fulfilling these requirements.[1] The developers accepted that the card would likely disappear from the meta, in exchange particularly for it continuing its role as a useful build-around for warriors.[1] The change also simplified what the developers considered an inappropriately complex design for a basic card, which intentionally feature relatively simple mechanics.[1]

The Warsong clan is a warlike orcish clan originally hailing from the plains of Nagrand. It was formerly led by the legendary Grommash "Grom" Hellscream, and later by his headstrong son, Garrosh Hellscream. The Warsong Outriders form the Horde forces in Ashenvale and Warsong Gulch, while the Warsong Offensive spearheaded the Horde Expedition's assault against the Scourge in Northrend.