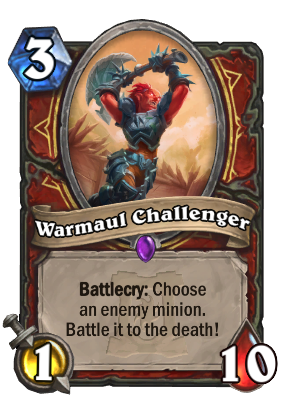 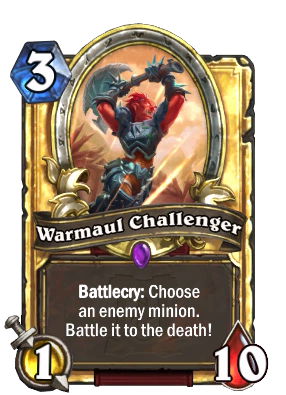 Battlecry: Choose an enemy minion. Battle it to the death!
Flavor text

Warmaul Challenger is an epic warrior minion card, from the Ashes of Outland set.

Warmaul Challenger can be used as a removal card that could potentially leave a body. The statline of this card is fairly robust, making the Battlecry an added bonus a lot of the time. The effect can cleanly destroy a 3/4, 4/3, 2/5, 5/2, 1/10 or 10/1 minion, and will leave one minion standing against any other statline. Since Warmaul Challenger attacks a minion repeatedly for low damage, it's a perfect card to combine with on-damage triggers on the board like Armorsmith and Frothing Berserker. It also can work great in combination with Rokara, as every time it attacks and survives it will gain +1/+1, allowing it to potentially survive against certain statlines it normally wouldn’t and leave itself on board as a worthy threat for following turns.

It can also be handbuffed to leave a very healthy body with a sizable attack.

This card depicts a fel orc warrior. However, the actual Warmaul are a clan of ogres with no orcs among their ranks.